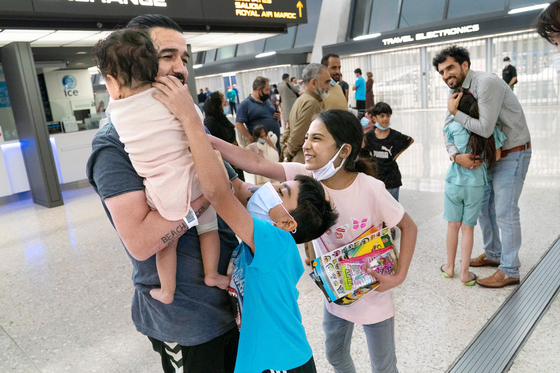 With bases in Qatar, Bahrain and Germany quickly reaching capacity, the Pentagon has been reviewing housing the evacuees in facilities both in the United States and overseas, according to the newspaper, citing American officials.

“As the crisis in Kabul unfolds and other nations have grown wary of housing large numbers of Afghan evacuees, the U.S. has begun taking a harder look at its own facilities in the U.S. and overseas,” according to the report.

The Pentagon is building a tent city equipped with medical supplies, food, water, restrooms and lighting at the Joint Base McGuire-Dix-Lakehurst in New Jersey, for Afghan refugees.

The U.S. Department of Defense earlier identified Fort Lee in Virginia, Fort Bliss in Texas, and Fort McCoy in Wisconsin as bases to begin housing refugees.

Dulles International Airport, located on the outskirts of Washington, is expected to become the central processing site for the Afghan evacuees, many who fear retaliation from the Taliban if they stay in their country.

The Joe Biden administration will seek assistance from up to five major U.S. commercial airlines to transport tens of thousands of Afghan refugees by activating the Civil Reserve Air Fleet, or CRAF, created in 1952 for the Berlin Airlift after World War II.

If approved, nearly 20 commercial jets would join more than 150 military cargo planes involved in the evacuation efforts, reported the New York Times reported Sunday, citing U.S. military officials. They will help transport thousands of Afghans arriving at U.S. bases in Qatar, Bahrain and the United Arab Emirates. They will also “augment” the transportation of Afghans from bases in the Middle East to Germany, Spain, Italy and other locations in Europe, and then ultimately to the United States, the report added.

The civilian planes aren’t expected to fly in or out of Kabul, which fell to Taliban rule on Aug. 15.

In a briefing Saturday, the Pentagon said that in the last 24 hours, six U.S. military C-17 aircraft and 32 charter flights departed from Kabul with a total of about 3,800 passengers.

Maj. Gen. Hank Taylor told reporters that some 17,000 people have been evacuated from Afghanistan since the beginning of the operation on Aug. 14, and 22,000 since the end of July.

The U.S. C-17 cargo aircraft are not considered suitable for longer flights over the Atlantic. 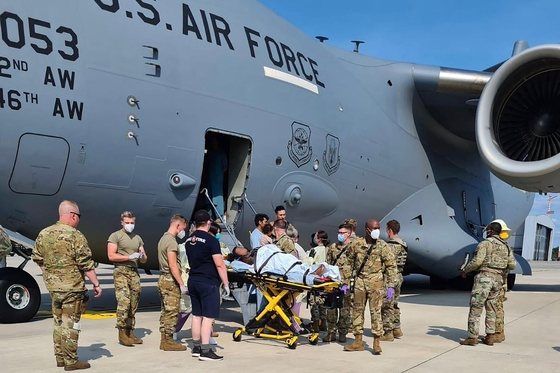 An Afghan mother who gave birth aboard a U.S. Air Force C-17 aircraft during an evacuation flight is transported to a nearby medical facility after landing at Ramstein Air Base in Germany Saturday. [U.S. AIR FORCE]

The Korean government is approaching the evacuee issue with caution.

A Seoul Defense Ministry official said Sunday, “We do not have a special position as we have not yet received any requests from the U.S. military.”

Likewise, the U.S. Forces Korea (USFK) said that to date, it “has not been tasked to provide temporary housing or other support for anyone departing Afghanistan,” but it left the possibility open.

Col. Lee Peters, a spokesman for the USFK, added in a press statement Sunday, “If tasked, USFK will work with the Department of State, Department of Defense and the Republic of Korea government while maintaining our ROK-U.S. Alliance and obligation to provide and maintain a robust combined defense posture.”

Seoul’s Foreign Ministry said in a statement that the diplomats “reaffirmed the international community’s strong commitment to cooperation to achieve an early establishment of peace and stability in Afghanistan” and stressed that accessibility to the country, including Kabul's airport, “is the most serious issue in supporting the safe departure of Afghanistan people."

Addressing the report on using U.S. military bases in Korea to house Afghan refugees, Rep. Song Young-gil, chairman of the ruling Democratic Party (DP), told reporters Sunday, “It has not been discussed with our government, and I don’t believe it to be realistic.”

Song said, during a lunch meeting with another lawmaker, on the evacuee situation, “It is also questionable if it is appropriate,” noting that “considering the transportation issue,” the refugees are likely to be temporarily housed in a nearer country.