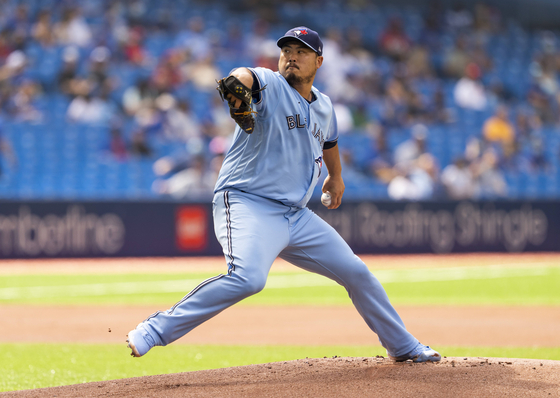 Ryu Hyun-jin of the Toronto Blue Jays pitches to the Detroit Tigers in the first inning at the Rogers Centre in Toronto on Saturday. [AFP/YONHAP]


Ryu Hyun-jin was on classic form on Saturday, throwing seven shutout innings to lead the Blue Jays to a 3-0 win over the Detroit Tigers at the Rogers Centre in Toronto.

Ryu's return to dominance couldn't have come at a more important time for the Toronto side. After suffering an especially painful 10th inning loss on Friday night and dropping two of three to the Washington Nationals in the week, the Blue Jays were starting to slide.

With a postseason play starting to look less likely, the team needed classic Ryu — the reliable ace not the shaky starter he has at times been in recent weeks — on the mound to give the batting lineup somebody to rally around. This time, Ryu delivered.

Ryu gave up five hits in seven innings pitched, throwing five strikeouts and allowing one walk. He left the mound at the top of the eighth with the Blue Jays up 7-0, allowing Tim Mayza and Jordan Romano to pitch an inning each to close out the game.

“Ryu was our ace today," Blue Jays manager Charlie Montoyo told MLB.com after the game. "Another great job. He gave us a chance. Bo [Bichette’s] defense at short turning double plays was huge today, too, because there was no room for error. Every play counted and our defense was good, but Ryu was outstanding.”

Saturday's game wasn't just a chance for the Blue Jays to lick their wounds and get back on their feet, but also an opportunity for Ryu to get back on track after a difficult month. After starting August with a 7-2 win over the Cleveland Indians, Ryu has struggled with a loss and a no decision before the win against the Tigers.

On Aug. 8, Ryu was tagged with seven runs earned in three and two thirds innings pitched against the Boston Red Sox. He was lucky enough to walk away from the clash with a no decision, as the Blue Jays rallied for a 9-8 win.

A week later on Aug. 14, Ryu took a loss to the Seattle Mariners, giving up four runs in six and one third innings pitched.

Across four games in August, Ryu has now allowed 13 runs in 24 innings for an ERA of 4.88 for the month, a significant drop from July, when he gave up eight runs across 26.1 innings for a 2.73 monthly ERA.

“It was huge. It’s about the circumstances of the game," said Montoyo. "We’re on a semi-losing streak, we need to win close games, the offense is not swinging the bats very good right now, so there’s no room for error. We needed a game like that, and he gave it to us. He was outstanding. Those were seven huge innings.”

Speaking after the game, Ryu also highlighted the importance of the result after a week of difficult fixtures.

“I feel like we’re doing very well as a group,” Ryu said through a team interpreter. "We all get prepared to win each game and play our respective roles appropriately. To come out with a performance like today from yesterday is good for our team."

The Blue Jays currently sit at fourth in the American League East, 10.5 games behind the Tampa Bay Rays in first and 4.5 games behind the Red Sox in third.  The Toronto club faces a difficult route to the postseason, but with plenty of baseball left to play and an increasingly reliable rotation, some fall baseball could still be on the cards.