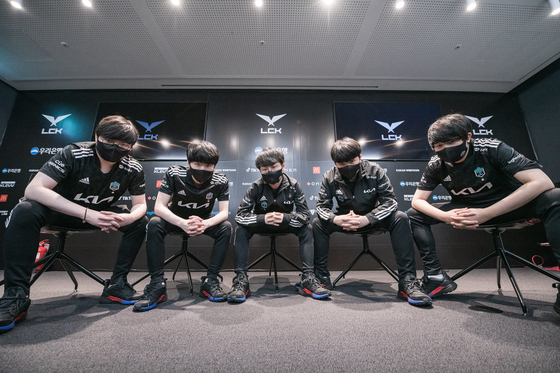 
DWG KIA demolished Nongshim RedForce in a 3-0 sweep in the second round of the 2021 League of Legends Champions Korea Summer Split playoffs, on Saturday evening.

The world-class duo of Heo "ShowMaker" Su and Kim "Canyon" Gun-bu were instrumental as always, but strong performances from Kim "Khan" Dong-ha were also on display. DWG KIA will be happy to have put up such a great showing in their last game at LoL Park this year.


Nongshim will be unhappy about their loss, but their season is far from over — the team remains in contention for a ticket to the upcoming World Championship. They will automatically qualify for Worlds if Gen.G Esports beats T1 on Sunday; if T1 wins that match, the RedForce will still get one last chance to make it through the regional qualifiers, which will take place after the postseason finals.


The closest game of the night was the first one, in which DWG KIA pulled ahead multiple times with smart and proactive play — mostly led by ShowMaker's Ryze — but ran into roadblocks again and again due to Nongshim clutching out important teamfights.

As the game dragged on, however, the power of DWG KIA's Jayce and Ziggs became more and more apparent. Eventually, a few missteps from Nongshim were all DWG KIA needed to slowly choke out a win.


The second set was a ghoulish nightmare for Lee "Rich" Jae-won, who had again been given Kennen against Khan's Jayce after his decent Game 1 performance in the matchup.

A series of perfectly timed and executed ganks from Canyon, however, extinguished Rich's chances of a repeat performance and created a tremendous early lead for Khan. DWG KIA's veteran top laner was soon able to press his huge advantage to completely take over the lane, and then the game.


Going into the third set, Nongshim made the belated decision to ban Jayce, then built a bottom lane-focused composition by picking Jinx and Thresh in the same rotation. DWG KIA responded with a classic Diana-Yasuo draft, topping it off with Rell.

Nongshim's plans in the draft were immediately blown apart when Canyon's Diana scored a double kill on Seo "deokdam" Dae-gil and Kim "Kellin" Hyeong-gyu less than five minutes into the game. Things turned from bad to worse when Rich was solo killed by Khan just a couple of seconds later.


Pressure from being 2-0 down seemed to weigh heavily on the Nongshim players' minds, and they continued to make hasty and risky plays rooted in desperation. Most of them backfired, unfortunately, and DWG KIA capitalized on such mistakes with zeal; by the 14-minute mark, they were already ahead by 4k gold.


Yet Nongshim still refused to surrender. Despite countless setbacks, they kept forcing open teamfights, and eventually managed to win a huge one around Baron at 21 minutes in. Just one minute later, they somehow repeated the feat at Drake, dramatically swinging back into a game that had looked to be all but over.


The miraculously won lead did not last long, however. Canyon pulled off a dream flank onto deokdam in a teamfight around Drake, blowing his Jinx up instantly and bringing the game back into DWG KIA's favor. With momentum back in hand, DWG KIA won the next teamfight at Baron as well and successfully closed out the series.

"This victory means a lot for us because now we won't have to play in the [regional qualifiers for Worlds], which saves us a ton of stress and time," DWG KIA head coach Kim "kkOma" Jeong-gyun told media at the post-match press conference. "In truth, I had expected a 3-1 victory for today's match, but our players and coaches prepared for it really well. I think that's why it went 3-0."

DWG KIA now have a chance to win their third straight domestic title — which would be kkOma's 10th. As both he and T1's Lee "Faker" Sang-hyeok currently hold nine LCK titles, there's a chance the two might clash for a very symbolic record next Saturday.

"I don't know which team we'll be facing in the finals, but I really want that 10th title," said kkOma. "And I'm really grateful to our players and coaches and staff for making it a possibility."

The LCK finals will be played on Aug. 28 at the CJ ENM Studio in Ilsan, Gyeonggi. DWG KIA will face off against the winner of the T1 vs. Gen.G match, which takes place on Sunday.