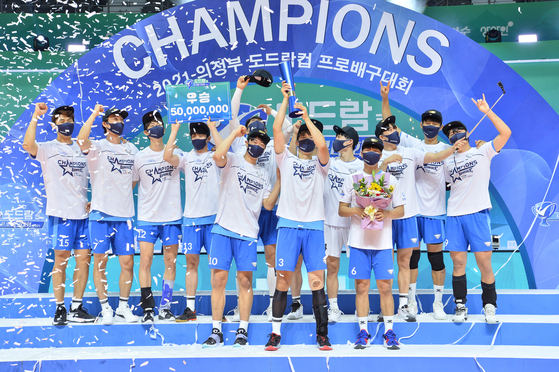 All three sets of the final match were close. The Wibees took the lead with 20-15 in the first set, but the Ok Saving Bank made a comeback toward the very last minutes to make the score 23-22. However, the Wibees were able to score three more to take the first set 25-23.

Ok Saving Bank led most of the second set taking the score difference to five points at 18-13 but toward the end, Wibees pulled themselves up to a 20-20 tie. It was a neck-and-neck competition from then on that saw the two teams tie six times. With ace player Na Gyeong-bok scoring the last point for the Wibees, the match finished 28-26.

Ok Saving Bank opened the scoring in the third set and quickly started dominating the Wibees by five points at 8-3. But the Wibees started their fight back and reached a 14-14 tie. They eventually took the lead again, and this time, did not let it go. The third set ended 25-21 after 30 minutes.

Na scored 22 points in total, the most points of the match and also had the most blocks with four. He recorded a 62.06 percent attack success rate throughout the KOVO Cup and was named MVP. 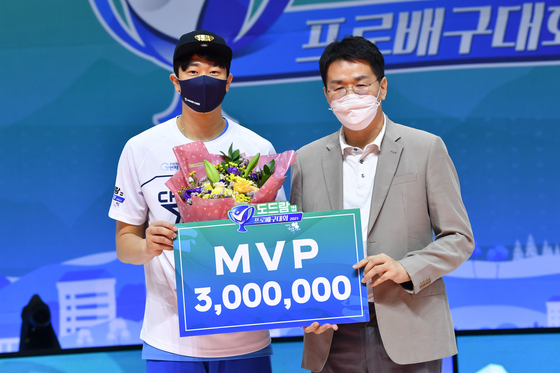 Na Gyeong-bok, left, of the Seoul Woori Card Wibees was named MVP of the KOVO Cup at Uijeongbu Gymnaisum in Uijeongbu, Gyeonggi on Friday. [NEWS1]


This isn't the first time that the Wibees and OK Saving Bank faced each other in the finals. The Wibees first won the KOVO Cup in 2015 after defeating OK Saving Bank and six years later, the Wibees took the trophy back from the same opponents. OK Saving Bank has reached the finals three times — 2015, 2019 and 2021 — but have never taken the title.

As the men's event has come to an end, the women's KOVO Cup starts on Monday with the GS Caltex Seoul Kixx taking on Korea Ginseng Corporation (KGC) Pro Volleyball Club. Some of the players, who were part of the national team at the Tokyo Olympics, will now be playing against each other each with their domestic clubs. Park Jeong-ah will be back at Korea Expressway Corporation Hi-pass. Pyo Seung-ju will be playing with Industrial Bank of Korea (IBK) Altos along with Kim Su-ji and Kim Hee-jin, but whether they will be playing in the preliminary matches remains unknown. Yang Hyo-jin is back with Hyundai Engineering & Construction Hillstate and if they reach the semi-finals, Yang will likely come on the court.

The defending champion GS Caltex Seoul Kixx has An Hye-jin and Oh Ji-young on its team and KGC Pro Volleyball Club will have Yeum Hye-seon and Park Eun-jin on while Lee So-young will be resting due to an injury.