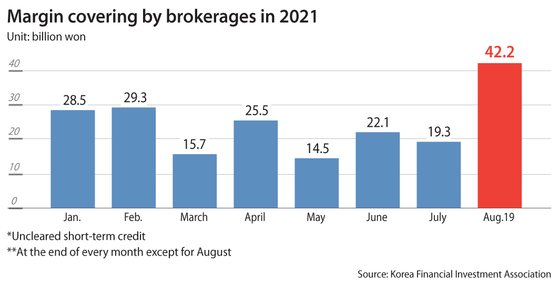 Leveraged punters are on pins and needles as stocks continue to trade down.

One 39-year-old office worker says he is stressed lately as the shares he bought last month continue to plummet. A Kospi-listed shipbuilding-related company he bought is down 28 percent.

To make matters worse, he bought the shares on margin. He deposited 20 million won ($17,000) at a brokerage and borrowed 15 million won from the brokerage to purchase the stocks.

"I borrowed on hopes of increasing capital in a short time," he said. "But now I'm agitated every time the stocks plummet."

The market could be set for a downward spiral. Brokers may soon be forced to sell shares bought on margin as their prices drop, putting more pressure on the market and further driving down share prices.

According to data from the Korea Financial Investment Association (Kofia) on Sunday, the balance of margin loans for Kospi and Kosdaq shares was 25.4 trillion won as of last Thursday. That is a 32-percent increase from the 19.2-trillion-won balance at the end of last year.

Last Wednesday, the balance reached 25.6 trillion won, which is a record high.

For margin trading, an investor pays roughly 40 percent of the money needed for stock trading and borrows the rest from a brokerage.

Brokers who make margin loans to customers have to unload shares when the losses incurred on the position gets too close to the amount invested.

Trading with uncovered-short-term credit is similar to margin trading, but with short-term credit, investors only have three business days to pay back their loans. It is a scheme mostly used by retail investors for aggressive investment.

The problem arises for investors that borrowed to invest when stock prices fall.

In the case of margin trading, most brokerages state in their contracts that they will sell shares bought on margin if the stock's value falls below 140 percent of the money deposited by the investor for the trade.

For margin trading, there is no statistics for how much has been sold for margin covering.

Some analysts say that the risk of margin covering is not yet very big considering the movement of local stock market indexes.

"If the Kospi falls below 3,000, there will be massive offloading for margin covering," said Pyun Deuk-hyun, vice president of asset management strategy at NH Investment & Securities. "Based on stock prices, guidelines differ by brokerages, but normally if a certain stock's price plunges by 30 percent, brokerages would sell for margin covering."

Stocks retail investors bet on with margin trading were mostly large caps, according to Koscom, an IT services provider 76.6 percent owned by the Korea Exchange.