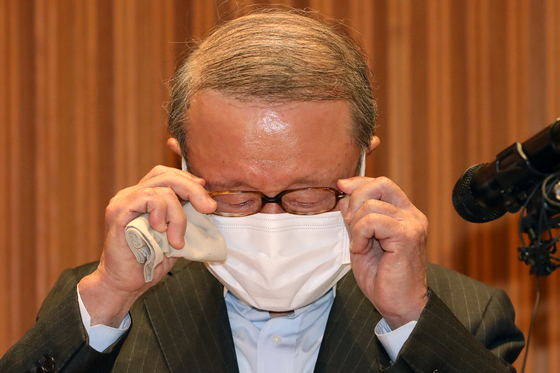 Namyang Dairy Products Chairman Hong Won-sik apologizes at a press conference held on May 4 after the company came under fire for a claim that its Bulgaris yogurt drink protects against Covid-19. [JOONGANG PHOTO]


Yogurt-gate continues as the chairman of Namyang Dairy Products clings to his post and is buying more time by delaying a meeting key for shifting control of the company to a private equity group.

He has also hired a law firm noted more for its litigiousness than its deal execution.

Namyang Dairy Products Chairman Hong Won-sik and related parties signed a stock-purchase agreement in May to sell 53.08 percent of the company to Hahn & Company for 310.73 billion won ($265 million).

Hong also said he would step down.

The deal and the promise came after Namyang's research institute said that Namyang’s Bulgaris yogurt drink could help protect people from Covid-19, unleashing a storm of accusations and setting into motion an investigation.

So far, the sale of the company seems to be stuck.

Payment was to be made on July 30, and new board was to be appointed that day at an extraordinary shareholders meeting, according to Hahn & Company. The deal is to formally close on August 31.

But on July 29, Hong delayed the meeting to September 14 “without a prior consultation with us,” said a spokesperson for Hahn & Company.

“We are doing our best to try to figure out in various aspects of why the seller is not closing the deal,” the spokesperson added.

In a statement released last week, Hong said “my stance has not changed.”

He added he delayed the extraordinary shareholder meeting because “the deal could not be closed when preparation by both parties is incomplete.”

Hong’s recent appointment of L.K.B & Partners to represent him in the takeover deal is raising suspicion that he may be preparing to file a lawsuit, although Hong said the appointment was made so that it would be easier to “cooperate” with the acquirer.

L.K.B & Partners is a company that is more specialized in legal disputes than mergers and acquisitions, a lawyer told local media outlet Newspim. Another lawyer said that Hong may be trying to cancel the deal by paying a penalty.

In the months following his promise to step down, Hong remained the chairman of Namyang Dairy Products, according to a semi-annual report released on Aug. 17

Namyang Dairy Products reported a 24.7-billion-won net loss in the first half, down 7 percent on year, on sales down by 1.1 percent to 471 billion won.

It had 84.7 billion won in cash and cash equivalents.

The company is estimated to have real estate worth more than 400 billion won, including its headquarters in Gangnam, Seoul.