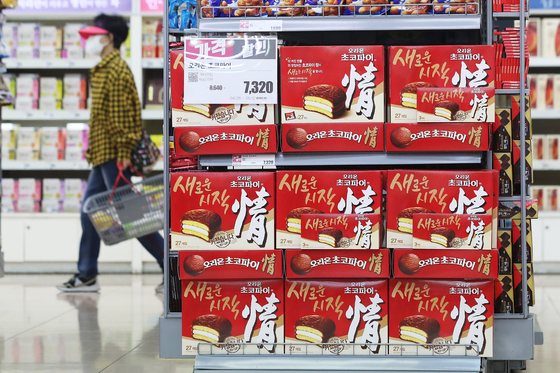 Orion's Choco Pies are displayed at a discount mart in Seoul. Prices of Orion products will remain the same in Korea, but rise in China and Russia. [YONHAP]


Confectionary maker Orion announced it will not raise the price of its products in Korea despite increases in production costs, but some foreign customers won't be so lucky.

The announcement came as many food manufacturers hike prices in the local market.

Orion announced Monday that prices of all of its products in Korea will remain the same. Orion's last round of price rises in Korea was in 2013, a full eight years ago.

Costs of the snack makers' main ingredients — eggs, oils and sugars — are rising and manufacturers are feeling the pain. In early August, sweets and snacks maker Haitai Confectionery & Foods raised the price of five products by an average 10.8 percent and Lotte Confectionery raised prices of 11 types of snacks by an average 12.2 percent.

The company said it's "doing the best to tame the production cost increase." It said its prices can remain unchanged in Korea due to effective cost management, including data-driven inventory optimization. Orion's operating profit margin was 16.8 percent in the January-June period, up 1 percentage point on year.

Prices will rise, however, for customers in China and Russia. According to Orion, raw material costs are rising at a faster rate in those two countries, too much for the company to handle.

For Chinese customers, prices of four pie snacks including Choco Pies and Q Di Pies will increase by some 6 to ten percent starting next month due to a rise in shortening and frying oil costs. In Russia, prices of all Orion products will rise by an average 7 percent starting Oct. 1. Russia is experiencing the biggest rise in ingredient costs such as cocoa, sugar and flour.

Input prices are rising in Vietnam too, but Orion is not raising prices. According to the company, competition among confectionary companies is strong in Vietnam, and Orion will aim to increase market share by maintaining its prices and releasing various new products.