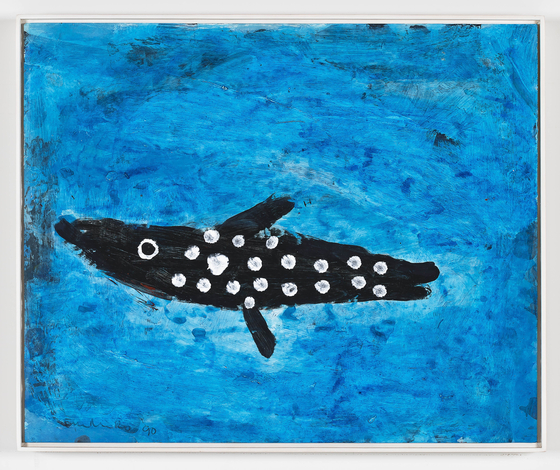 ″Riffhai,″ a painting by Ro Eun-nim which is currently on show as part of her "Beginning of Life: am Anfang" exhibition at Gana Art [GANA ART]


“I think I was born to be an artist. I’ve been a painter for 50 years and I just can’t imagine a life without painting.”

This is what Ro Eun-nim, a 75-year-old artist living in Germany, said during a lecture when she visited Korea in 2019.

“In my younger days I lived like I was being punished,” said Ro. “I suffered because I was lonely, and I was lonely because I suffered. These feelings drove me to paint a lot.”

These painful times gifted Ro with beautiful artworks. Her paintings are far from “loneliness” or “suffering.” Rather, they are filled with a lively energy, like a fish swimming in clear blue waters, and convey comfort and joy with their bold lines and colors.

Ro’s solo exhibition “Beginning of Life: am Anfang” is being held at Gana Art in Pyeongchang-dong, central Seoul until Aug. 29. A total of 31 works, painted from the 1980s to as recent as last year, are on display. The exhibition already saw massive success before it even opened on Aug. 5 with half of Ro’s works reserved in advance. Twenty-nine pieces were sold just three days after it opened. 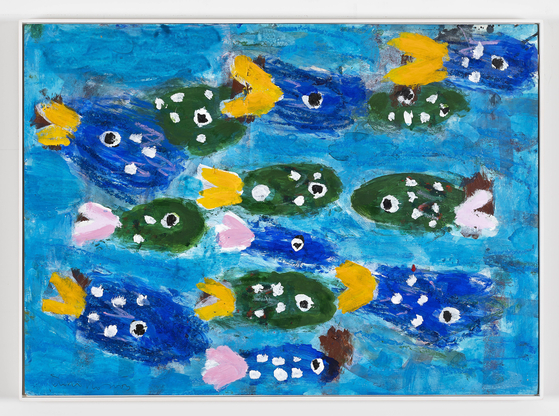 
Ro has lived in Germany for over 50 years since 1970, and worked as a nurse assistant in Hamburg. During her time as a nurse assistant, the chief nurse accidentally saw a piece of Ro’s art and encouraged her to open an exhibition inside the hospital, which subsequently began Ro’s art career. In 1973, Ro studied painting at the Hamburg Academy of Fine Arts. After graduating and working full-time as an artist, she became the first Korean to be appointed a professor at the Hamburg University of Applied Sciences, where she taught students for 20 years.

The theme that penetrates Ro’s work is “life.” The dots depicted in her pieces represent the beginning of life. Whether it be drastic paint strokes expressing cats, fish, flowers or even ants, they are always imprinted with dots. Ro describes the dots as eyes — the sign of life.

In her collection of poems, titled “With the Eyes, With the Heart” (translated), Ro explained her reasons for portraying nature in her work. “I realized that I am just a small grain of sand in the presence of Mother Nature,” she wrote. “Putting aside all complexities or technology, art comes to life when only simplicity remains.”

“Beginning of Life: am Anfang” displays all pieces of her “Untitled” series — from 1984, 1996 and 2003, portraying the birth of a fish and bird. Her painting from last year, “Beginning of Life,” is also an eye-catching piece, with its simple and daring lines.


Ro recently revealed that she was diagnosed with cancer. In a phone interview with the JoongAng Ilbo, an affiliate of the Korea JoongAng Daily, Ro said that she was surprised when she first heard the news. 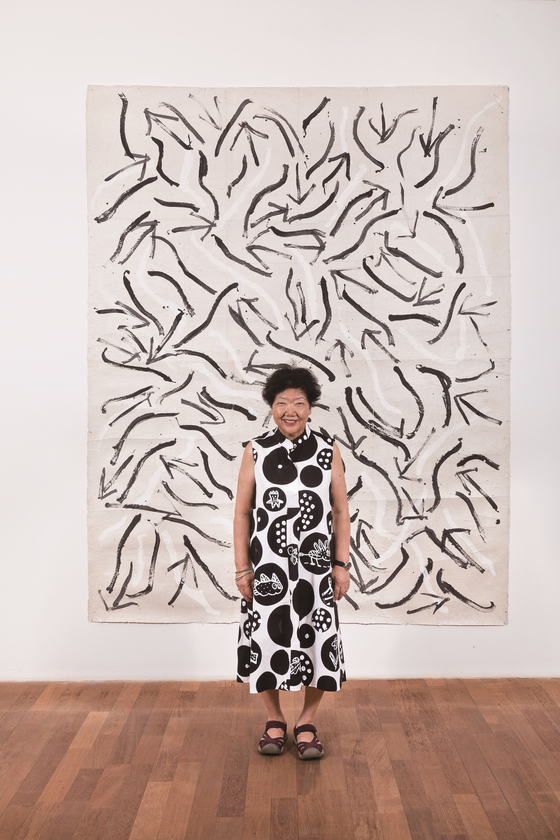 
“There were times when I couldn’t paint because I was in poor health,” she said. “But a miracle happened. I suddenly felt much better, and I’ve been strolling around in Michelstadt every day, which is in southern Germany.”

When asked if she still paints in her spare time, she replied, “I don’t paint in my spare time. I paint like I eat [habitually and constantly].”

“Painting was the medium and road for me to solve life’s problems,” Ro once said in 2007. “In that process I have burned, melted, forgot and looked into myself. You don’t necessarily have to fight like a warrior to survive life. Rather, you should be like a child that runs and plays in the meadows.”

And so Ro’s art continues to live on.