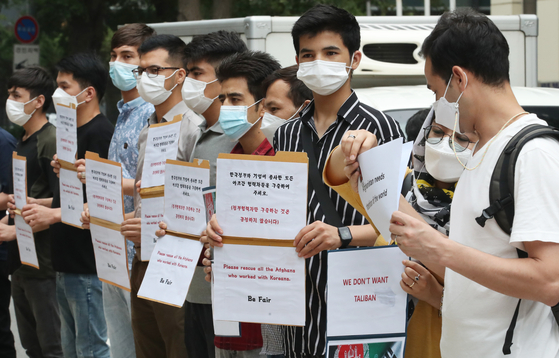 A group of Afghans living in Korea implore the government to evacuate their families from Afghanistan, fearing retaliation from the Taliban, in a press conference in front of the Foreign Ministry in central Seoul Monday. Seoul is considering support for Afghans who helped on Korean government cooperation projects in Afghanistan. [NEWS1]

Asked about the Afghan issue by the National Assembly's foreign affairs committee Monday afternoon, Foreign Minister Chung Eui-yong stressed there is “no such discussion underway at all” with the United States on accommodating evacuees at U.S. Forces Korea (USFK) bases.

But when pressed by a lawmaker if Washington had made a request for evacuees to be temporarily housed at U.S. military bases in Korea, Chung replied, “It is true that the possibility was discussed at the very basic level at an early stage. But it was not discussed seriously."

He added that Korean government consent is necessary in order to accommodate Afghan evacuees at the military bases.

The Wall Street Journal reported Saturday that the Pentagon is considering U.S. military bases in Japan, South Korea, Germany, Kosovo, Bahrain and Italy, among other potential sites, to provide housing for Afghan evacuees.

The issue is already splitting the Korean public, with some calling for support of international humanitarian efforts and others wary of opening the borders, taking into consideration the geographic distance from Afghanistan and the country’s generally conservative stance on granting refugee status. 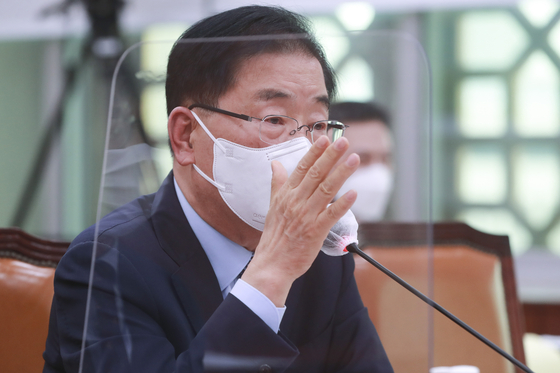 Chung said the government is separately taking into consideration providing support to Afghans who have participated in Korea’s humanitarian cooperation projects with Afghanistan over the past 20 years, such as building a general hospital. Noting that there are a number of these Afghans who wish to seek refuge in Korea, Chung said that the government will review how to safely allow for such a process.

Song Young-gil, head of the ruling Democratic Party, said Sunday that there are about 400 Afghans, including engineers, who collaborated on the hospital and school construction projects led by the government. He said that it is “necessary to bring them to Korea safely,” calling for diplomatic efforts to enable such a process.

While the United States appears to have prioritized cooperating with countries located closer to Afghanistan so far, the Biden administration may still formally call on Seoul to agree to use U.S. military bases in Korea to temporarily accommodate evacuees.

U.S. President Joe Biden said in a speech at the White House Sunday that his government is working with some two dozen countries to establish “processing stations” for the Afghan evacuation operation process.

Biden said that in order to “maximize” evacuation capacity, the United States has “established a series of processing stations in third countries.”

He continued, “In short, we’re not flying them directly to their country, we’re flying to these processing stations where we’re working with more than two dozen countries across four continents.”

The United States has secured agreements “across the Gulf, in Central Asia, and in Europe, including processing centers in Qatar, Germany, Kuwait, Spain, and elsewhere that allows us to sort and process these evacuees,” Biden added.

Biden said that the transit centers provide a safe place for Afghan evacuees, including special immigrant visa (SIV) applicants, to complete their paperwork and undergo security screenings and background checks before they continue on to final destinations in the United States or in another NATO country.

He was likely referring to the 24 countries that the U.S. State Department listed on Friday as helping to transit Americans and Afghan evacuees through their territories.

Ned Price, the State Department spokesman, said Bahrain, Denmark, Germany, Italy, Kazakhstan, Kuwait, Qatar, Tajikistan, Turkey, the United Arab Emirates, the United Kingdom, and Uzbekistan have been, or will be, transiting Americans and others through their territories to safety.

However, key U.S. allies like South Korea, Japan, Australia and New Zealand were excluded from the State Department list, which possibly focused on locations that were geographically closer to Afghanistan.

Price said in the briefing, “We are very encouraged that other countries are also considering providing additional support. And this is something on which we will continue to be focused.”

The U.S. military has evacuated some 28,000 people since Aug. 14 from Afghanistan since the Taliban seized control of the country, including around 11,000 people in about 36 hours over the past weekend, which Biden said “reflects a tireless diplomatic effort.”

The United States has been scrambling to evacuate as many people as possible with only one week left until an Aug. 31 deadline for the withdrawal of U.S. forces from Afghanistan, though an extension is possible.

Biden in his speech Sunday said, “From Asia to Africa, from Europe to the Western Hemisphere, nations are making generous offers to support resettlements efforts.” He added that he has been “in personal contact with the leaders of many countries,” but did not mention Korea.

Suh Hoon, director of the Blue House National Security Office, said in a parliamentary session Monday that the United States has decided to use its military bases in the Middle East and Europe to house Afghan evacuees because of “geographical conditions or conveniences.”

The U.S. Forces Korea has so far “not been tasked to provide temporary housing or other support for anyone departing Afghanistan,” said Col. Lee Peters, a spokesman for the USFK, in a press statement Sunday.

However, he left the possibility open and said that if tasked, the USFK will work with the U.S. State Department, Pentagon and the Korean government while maintaining the bilateral alliance and an “obligation to provide and maintain a robust combined defense posture.”