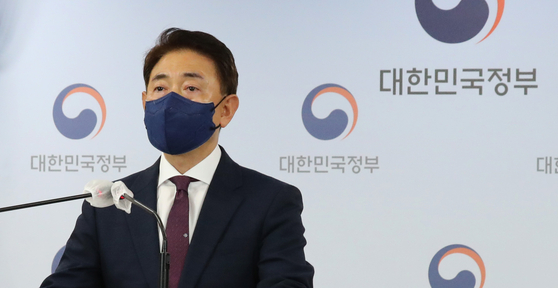 Kim Tae-eung, head of the special investigation team of the Anti-Corruption and Civil Rights Commission, on Monday announces the outcome of the investigation into real estate investments of opposition lawmakers and their families. [YONHAP]

The Anti-Corruption and Civil Rights Commission announced Monday the outcome of its probe into property investments made by lawmakers of six opposition parties, their spouses and immediate family members. According to the commission, it combed through property transactions of 507 people, including 116 lawmakers. Among the lawmakers, 102 are members of the PPP and the remaining 14 lawmakers belong to five other parties.

Kim Tae-eung, head of the commission’s team in charge of the probe, said 13 cases of dubious dealings were traced back to 12 PPP lawmakers, with eight of the 13 cases done by PPP lawmakers themselves.

One case was found for a lawmaker of the Open Minjoo Party, an ally of the ruling Democratic Party (DP).

At the press conference, Kim did not announce the names of the lawmakers who made the questionable real estate investments, leaving it up to each party to make public the details.

The commission said it found no suspicions linked to lawmakers of four other parties including the Justice Party and People’s Party.

Kim said the commission’s findings were handed over to the National Police Agency for further action.

A similar investigation took place earlier this year for the DP lawmakers and their families. The commission said in June that it found 16 cases of suspicious transactions involving 12 lawmakers or their families.

“In order to keep things fair, we used the same standards that were used for the ruling party with the opposition parties,” Kim said. “We did our best to respect law and principle and informed the investigative authority of all suspicions, no matter how small it was.”

Kim also said the two sets of probes should serve as an opportunity to end powerful politicians’ practice of real estate speculations.

As of 6 p.m. on Monday, the PPP had not announced the names of the 12 lawmakers suspected of having made dubious property investments. Chairman Lee Jun-seok of the PPP previously said he would make sure that the lawmakers face severe punishments — possibly stronger than what the DP leadership had taken against its lawmakers.

After the anti-corruption commission’s probe, the DP asked its 12 lawmakers accused of having made suspicious property investments to give up their party affiliations. It kicked out two of the proportional lawmakers in June, allowing them to maintain their seats in the National Assembly as independents. If they had left the party voluntarily, their seats would have been succeeded by other DP candidates. The 10 others, however, still maintain their ruling party affiliations.

According to the commission, the case associated with an Open Minjoo Party lawmaker was a suspicion of purchasing property based on confidential information obtained while on the job.

Although the commission did not identify the Open Minjoo Party lawmaker of concern, sources informed about the probe told Yonhap News Agency that it was Rep. Kim Eui-kyeom. Kim, a former spokesman of President Moon Jae-in, resigned in March 2019 after an explosive backlash to reports that he dabbled in real estate speculation with inside information.

Kim purchased a two-story building inside a redevelopment project in Heukseok-dong in Dongjak District, southern Seoul, for 2.57 billion won ($2.26 million won) in July 2018, just weeks before the government labeled the area an “anti-speculation zone” to regulate mortgages. Kim, however, narrowly avoided the restriction.

While Kim did not win a seat in the April 2020 general elections, he became a proportional representative in March this year, succeeding the post vacated by Kim Jin-ae to run for the Seoul mayoral by-election.

Race to the finish