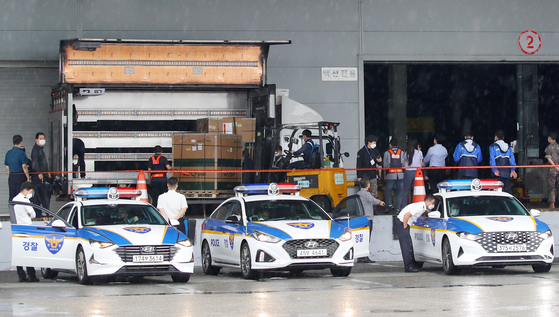 Workers load boxes carrying doses of Moderna's Covid-19 vaccine onto a truck at the cargo terminal of Incheon International Airport on Monday, after 1.01 million doses of the vaccine arrived. The arrival of the first batch, part of 7 million doses to be supplied over the next two weeks, followed a supply disruption due to a production issue at the U.S. pharmaceutical company. [YONHAP]


The number of Covid-19 critical cases and fatalities among unvaccinated young people is on the rise, health authorities said.

According to the Korea Disease Control and Prevention Agency (KDCA), the country saw 1,418 more Covid-19 cases on Monday, with the total caseload coming to 237,782.

The number of critically ill patients rose by four from the previous day to 399, while seven more virus deaths were added, with the death toll now standing at 2,222.

Despite younger people being less likely to become critically ill from Covid-19, two Covid-19 patients in their 20s died in Korea last week.

One tested coronavirus-positive on Aug. 12 and the other on Aug. 20, and they passed away while hospitalized, the KDCA said Monday.

Total fatalities in their 20s now stand at eight, with all known to have had underlying diseases. Five became ill after the fourth wave of the pandemic hit the country in July, and all within a four-week period.

Health authorities previously warned that fatalities tend to increase three weeks after an increase in the absolute number of confirmed patients. This raises the possibility that the number of deaths among young people will continue to grow, as they are still mostly unvaccinated.

Korea kicked off its vaccination campaign on Feb. 26, with the elderly and frontline health workers given priority status because they were at higher risk of contracting the virus. After waiting for months, the younger public aged 18 to 49 will finally get their turns from this Thursday.

The KDCA said nine in ten new Covid-19 cases during May to July in Korea were reported to be unvaccinated people.

The number of critically ill patients and fatalities numbered 1,415 during the same period.

“Even when analyzing infections from February to August, 91 percent of them are unvaccinated people,” Sohn Young-rae, a senior epidemiological strategist at the government’s Central Disaster Management Headquarters, told reporters on Monday.

“The situation abroad is similar, and they describe the fourth wave as an ‘unvaccinated pandemic,’” he said.

Sohn said vaccines greatly prevent the possibility of a Covid-19 infection deteriorating into severe illness or death, urging more people to get vaccinated.

“Data analyzed from May to July in Korea showed vaccines were around 85 percent effective in preventing severe illness and around 97 percent in stopping death,” Sohn said.

“When inoculated, the possibility of a breakthrough infection is small, but even when it happens, it rarely develops into severe illness or death,” he said. “I sincerely ask you to actively participate in the vaccination campaign.”