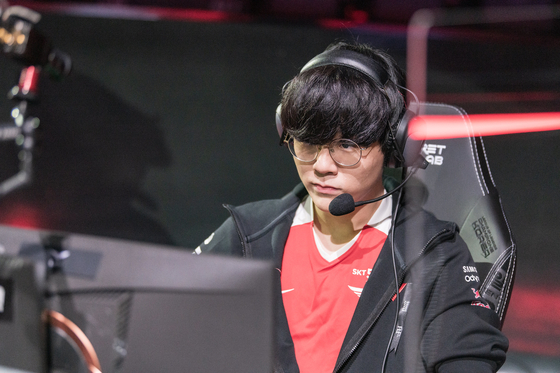 
T1 took down Gen.G Esports 3-1 in the second round of the League of Legends Champions Korea Summer Split playoffs, on Sunday evening. With this victory, T1 have secured their spot in not only the finals but also this year's World Championship.

It will be legendary mid laner Lee "Faker" Sang-hyeok's sixth appearance at Worlds; the only other Korean player to hold that record is Faker's former 2013 SK Telecom T1 K teammate Jeong "Impact" Eon-yeong, who made it to Worlds once with SKT then five times with North American teams.

The first game involved T1 pulling out some new picks from under their sleeves, with Faker going for Irelia and Kim "Canna" Chang-dong grabbing Renekton, both for the first time this split. Gen.G, on the other hand, opted to have faith in their comfort champions, placing Kwak "Bdd" Bo-seong on Azir and Kim "Clid" Tae-min on Lee Sin.

While T1's composition was a bit too high-risk to begin with, execution quickly proved to be a greater issue. Faker repeatedly got caught out in the mid lane, and Gen.G edged ahead in several early skirmishes, mostly by virtue of being more experienced on their picks. With Bdd's Azir shining in particular, Gen.G swiftly snowballed, and T1 failed to recover from their disarray until their Nexus fell.

The second game saw T1 return to the tried-and-true, with Faker and Canna opting for Ryze and Gwen respectively. Gen.G maintained their approach to the draft, keeping their Aphelios-Thresh bottom duo while giving Bdd and Clid another set of comfort picks in Zoe and Jarvan IV.

T1's adjustments had immediate effect. Despite Gen.G again getting off to a strong start, this time T1 were able to keep their heads on and avoid excessive bleeding. A couple of smart engages from Park "Teddy" Jin-sung and Ryu "Keria" Min-seok soon brought the game back into T1's favor, and Gen.G began to look lost, partly due to their rather clunky composition. From then on, Canna's Gwen took over the reins and closed out the game with a dominant carry performance.

The third game was the closest of the night. Both sides stayed even in gold and made roughly the same amount of missteps until the 24-minute mark, but then a poorly thought-out Baron attempt from Gen.G led to T1 taking a tower and a drake for free, slightly tilting the balance.

T1 started widening their lead from then on by performing better in teamfights with Teddy's Jinx at the helm, but through smart side lane play and backdoor pressure, Gen.G was able to keep things tense and stall out the game for an incredible length of time. Gen.G's tightrope act could not last forever, however, and T1 were eventually able to force a teamfight at Baron then close at the 50-minute mark.

Down 2-1, Gen.G significantly altered their strategy going into the fourth game by first picking Camille, locking in Diana-Yasuo for Clid and Bdd, then rounding out the composition with Xayah-Rakan. This was by no means a smart draft, however; T1 was able to give Faker Ryze for the third game in a row, and effectively counter Gen.G's entire composition by placing Teddy on Ezreal and Moon "Oner" Hyeon-joon on Olaf.

On the Rift, some questionable decisions were made by both sides in the early-to-mid game, but the overall flow of play was similar to the third set, with global gold staying relatively even and both teams happy to continue farming.

As the game progressed, however, Park "Ruler" Jae-hyeok's Xayah continued to demonstrate why the champion is currently borderline unviable in professional play. Teddy's Ezreal, on the other hand, was able to repeatedly shred through Gen.G's entire team practically untouched. Two late game teamfights were all Teddy needed to basically end the game — and the series — on his own.

T1 are now set to meet DWG KIA in the finals. As Faker and DWG KIA head coach Kim "kkOma" Jeong-gyun both hold nine domestic titles, the two will face off with a very symbolic record on the line.

"I hadn't heard of that. That's pretty interesting," Teddy said in the post-match interview, after being told of the Faker versus kkOma showdown. "I guess we'll have to help [Faker] win another title, then."

"I remember losing a lot against [DWG KIA] during the regular season," Teddy said. "So this time I really want to take a win."

The 2021 LCK Summer Split Finals will be played on Aug. 28 at the CJ ENM Studio in Ilsan, Gyeonggi.