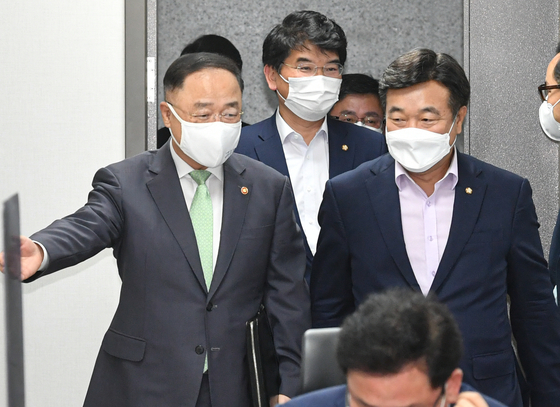 Finance Minister Hong Nam-ki, left, walks in to the meeting with Democratic Party floor leader Yun Ho-jung, right, at the National Assembly to discuss the budget for 2022. [YONHAP]

The ruling Democratic Party and government agreed to offer interest-free loans to young people with annual incomes of 50 million won ($42,600) or less to help them pay rent.

They also agreed to widen government subsidies to families with young children. The subsidies are currently given to people with a child seven years old or younger. That will be raised to eight years old.

The ruling party and the government discussed next year's budget on Tuesday at a meeting, with calls for more spending.

“This year’s budget when including supplementary budgets amounts to 604.7 trillion won,” said ruling party floor leader Yun Ho-jung. “But to overcome the [coronavirus] crisis, we need a budget [for 2022] that is larger.”

The government plans to announce details of its budget plan by the end of this month.

“If the Covid-19 crisis is prolonged, the difficulties that people face will only grow,” Yun said. “Although we have managed an overall budget of 1 trillion won through the supplementary budget to help [small business that have suffered from social distancing regulations], it is not enough when you consider all the unexpected variables such as the virus variants.”

The DP floor leader stressed that the government has to be aggressive in spending.

“The nation’s coffers exists for the public,” Yun said. “We ask [the government] for a budget with real protection for the public. And as it is the last budget of the Moon Jae-in government, [the ruling party] will do its part with a meticulous evaluation.”

“We will try to provide support without any blind spots so that the economy will recover and co-existence [between big and small companies] thrives,” Hong said.

Next year’s budget may have a particular focus on aid to young people.

The ruling party and government have agreed on allocating at least 20 trillion won to policies that target young people facing problems with housing and employment.

Supportive may include loans to pay rent, scholarships as well as transportation expense subsidies.

Other social welfare programs likely to see a boost include raising monthly subsidies for single parents from 100,000 won to 200,000 won as well as an annual 100,000 won education voucher for low-income families.

Enlisted servicemen will get raises. The monthly paycheck of a sergeant will be raised 10 percent from 609,000 won to 670,000 won.

Next year's budget for meals for servicemen will be raised.

The Moon administration and DP are losing popularity among the young .

Surging real estate prices have made housing more expensive and restrictions on mortgages have made buying property more difficult.

Taxation of stock investments has upset young investors, as well as miscommunication on cryptocurrency regulations that led to major losses.

Jobs were another area in which young people have struggled despite Moon’s promise of quality jobs.

Mounting frustration among young people was seen as a factor in the DP’s loss in by-elections for mayoral seats in Seoul and Busan in April.