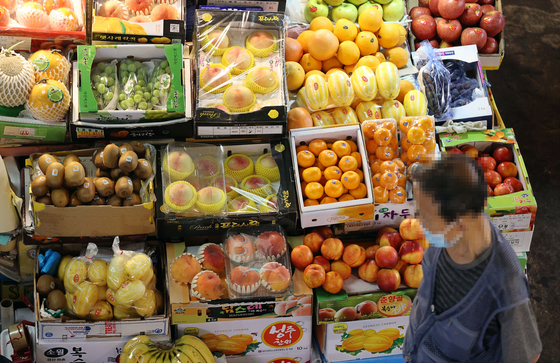 A variety of fruits are displayed at a traditional market in Seoul on Tuesday. [YONHAP]


Chuseok is set to be more expensive with inflation driving up the prices of items commonly given to colleagues, family and friends during the holiday, which falls on Sept. 21 this year.

That gift basket is getting expensive.

The average price of 10 pears at local discount marts and traditional markets was about 50,778 won ($44) as of Aug. 23, up 45.2 percent on year, according to data provided by the Korea Agro-Fisheries & Food Trade Corporation.

The price of 10 apples rose 17.9 percent to 31,236 won during the same period. Farmers usually harvest pears and apples in fall and store them. But the heavy rain and typhoons last year led to poor harvests, which resulted in higher prices.

Milk prices are also rising fast. On Aug. 17, the Korea Dairy Committee announced a 21-won increase in raw milk prices to 947 won per liter this year, the first increase in three years. The raw milk price is determined by taking into consideration the production cost per liter, which is announced by Statistics Korea in May. The new price is set by adding 90 to 110 percent of the production cost increase to the previous price.

The Ministry of Agriculture, Food and Rural Affairs proposed to the Korea Dairy Committee a delay in the price hike, but negotiations broke down as dairy businesses argued that price rise is inevitable considering the rising labor costs.

The rise in the raw milk price will inevitably cause an increase in prices of processed foods, like bread, snacks and ice cream, that use milk.

The consumer price index was 107.61 in July, up 2.6 percent compared to the previous year, according to data provided by Statistics Korea. The on-month increase has been around 2 percent-level for four consecutive months since April.

The Korean government plans to release the fifth round of support payments to most Koreans, and these cash handouts can drive food prices up. When the government distributed funds in May, overall food prices, as well as prices of agriculture, livestock and fishery products, rose.

“While people earn less due to the Covid-19 pandemic, the prices of food, especially the popular items like fruits that households frequently purchase, are on the rise, so consumers feel the increase more strongly,” said Park Young-bum, economics professor at Hansung University.

The Korean government promised it will endeavor to maintain a stable supply of food.

“The prices of apples and pears will decline soon as the early cultivated ones are released into the market,” said Vice First Finance Minister Lee Eog-weon. “The government will exert all efforts to lower the prices of agriculture, livestock and fishery products.”