A truck with an electronic signboard urging the government to improve its guidelines about holding wedding ceremony operated by a civic group representing soon-to-be married couples and newlyweds in front of the Seoul City Hall in central Seoul on Aug. 19. [NEWS1]


Couples are being gouged by wedding halls as they change their plans due to the pandemic, and they are forced to pay huge cancellation fees.

Efforts by the regulators to stop this practice have been all but useless.

A 30-year-old bride-to-be is outraged at the policies of the wedding hall she booked in Bucheon, Gyeonggi. She wants to cancel her wedding ceremony, which is scheduled for November, amid the fourth wave of pandemic, but the wedding hall has charged her millions of won anyhow.

“The wedding hall said it can only return 30 percent of the payment if I cancel the reservation, and offered no refund for the payment I made for a dress, make-up and a photo studio package,” She said. “The cancellation fees total about 5 million won [$4,300] while the package cost another 1.5 million won.”

She made a reservation for a hall that can handle up to 300 guests, but the government has limited the number of attendees to a wedding to 49. She asked the company if it could reduce the available seats, but she was denied.

Even if she wants to postpone the ceremony, the date can only be delayed three months. If she postpones it once, no more delays will be possible, she was told by the wedding hall.

In September, the Fair Trade Commission (FTC) announced rules that allow couples to postpone or cancel their wedding plans without a fee if there is a good reason, like social distancing guidelines. However, the rules were merely recommendations and not legally binding, and the lack of teeth and specifics in the guidelines has frustrated many young couples.

Also, the FTC’s rules don’t include details about additional expenses, such as dresses, make-up and photo studios. 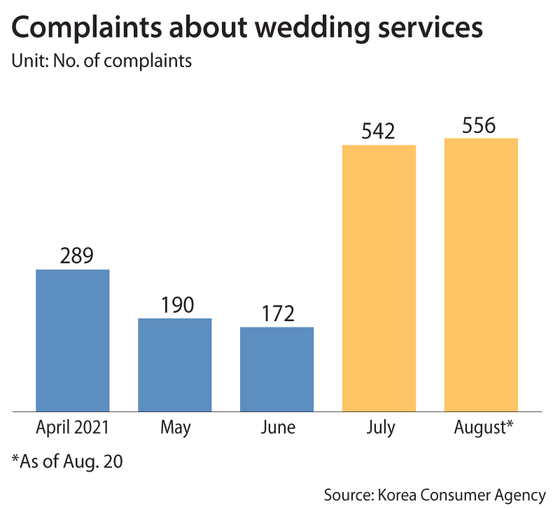 According to the Korea Consumer Agency, a total of 556 consumer complaints about wedding services were filed between Aug. 1 and Aug. 20. That’s up 211 percent compared to June, when 172 cases were filed. Most of the cases were about the conflicts with wedding companies in which huge of fees were requested when people asked for a cancellation of a wedding ceremony due to the concerns over the coronavirus.

A 29-year-old soon-to-be bride who was about to get married in September recently postponed the ceremony by a month. But she still feels anxious because she doesn’t know whether the situation will be improved in October.

“It’s really difficult for us to tell guests about the delays only one and two months prior to the scheduled date,” She said. “Expenses for dresses, make-up and studios are a different problem, and the FTC’s recommendation is completely useless.”

“The government limits the number of attendees to a wedding to 49, which is not enough to invite even my closest friends,” she said. “Just completely banning the ceremonies might be the better option for me.”

Since Aug. 19, a civic group representing soon-to-be married couples and newlyweds has been operating a truck with an electronic signboard in front of the Seoul City Hall in central Seoul, urging the government to improve its social distancing guidelines about holding weddings.

Around 2,000 soon-to-be married couples and newlyweds gathered online via social media to form the group and collected money to run the truck. They also issued a statement and started sending it to many government offices, including the Ministry of the Interior and Safety, the Ministry of Gender Equality and the Family and Ministry of Health and Welfare Tuesday.

“Concerts are allowed to have 2,000 seats while department stores have no limits. But why only up to 49 people in a wedding hall?” the signboard said. “Wedding companies are shifting blame and we are the ones who have to pay millions of won in fees.”

The group also urged the government to “revise the current regulation limiting the available seats in a wedding hall,” and “come up with a legal order to ban companies from imposing fees when people were forced to cancel or postpone the weddings.”

Regarding the situation, the FTC has not been taking a stand.

“We understand the struggles, but as the situations vary by individuals and the social distancing guidelines are government policies, we can’t blame only one side,” said an FTC spokesperson. “If consumers file a civil suit regarding the situation, the FTC’s recommendation will work to their advantage.”

ChoA of girl group Crayon Pop to tie the knot on Dec. 25