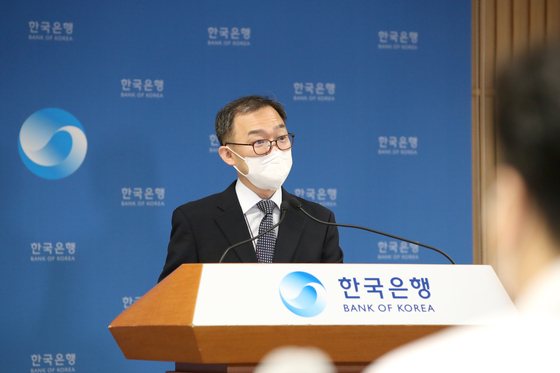 Song Jae-chang, head of the monetary and financial statistics team at the Bank of Korea, speaks during an online briefing Tuesday. [BANK OF KOREA]

Household debt rose 10.3 percent on year in the second quarter to 1,805.9 trillion won, hitting a new record as Koreans borrowed big to buy into initial public offerings and to finance real estate.

“There was huge demand for loans to take part in initial public offerings at the end of April," said Song Jae-chang, head of the monetary and financial statistics team at the Bank of Korea during an online briefing Tuesday.

Household debt includes loans from banks, insurers and other private and public lenders, and credit card debt. Mortgages are included.

By the amount of the on-year increase, it is the largest ever. By on-year growth rate, it was the highest since 10.4 percent recorded in the second quarter of 2017.

Household's lending from financial institutions, which is most of household debt, grew by 10.3 percent on year in the April-June quarter to 1,705.3 trillion won ($1.5 trillion).

Mortgage lending grew by 8.6 percent on-year to 948.3 trillion won, while the miscellaneous category, which includes unsecured loans, jumped by a record high of 12.5 percent to 757 trillion won.

Credit card debt grew by 10.3 percent on year to 100.6 trillion won in the latest quarter as vaccinations boosted consumer confidence.

As household debt continues to mount despite efforts by financial regulators to curb lending, eyes are now on the monetary policy board meeting to be held Thursday. Central bank chief Lee Ju-yeol has already suggested a rate hike this year.

The latest resurgence of the coronavirus and the spread of Delta variant of the respiratory syndrome could hold the board back.

The central has been holding its key interest rate at a record low of 0.5 percent since May last year.