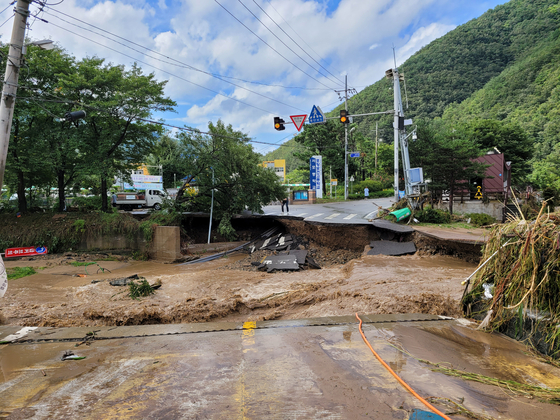 A road in Pohang, North Gyeongsang, is shown cut off on Tuesday as a road bridge was swept away due to heavy rainfall brought by Typhoon Omais overnight. [YONHAP]


Typhoon Omais passed through the Korean Peninsula with no casualties reported as of Tuesday morning, though it did cause significant flooding resulting in damages along the nation's coastlines and southern regions.

Accompanied by winds with speeds of 25.3 meters per second (56.6 miles per hour), rainfall up to 400 millimeters (15.7 inches) and flashes of lightning, the typhoon resulted in serious damages to buildings and roads, and thousands of people in southern cities were evacuated from flooded houses.

Heavy rainfall, which brought flooding high enough to reach an adult man’s waist, was a major cause for much of the damage.

Firefighters across the country rescued 18 people from flash flooding, according to the Central Disaster and Safety Countermeasures Headquarters.

As many as 1,676 firefighters around the nation took part in rescue operations in accidents caused by the typhoon.

Due to potential dangers of landslides and flash floods, around 10,000 people in Busan, South Gyeongsang and South Jeolla were forced to evacuate their residences.

Means of transportation were also affected.

The typhoon suspended the services of 86 flights and 70 ferries. Flights restarted on Tuesday, but most ferry rides to Jeju Island are still suspended as of Tuesday evening.

Railways in South Gyeongsang were stopped due to thick mud covering the tracks. Trains resumed operation at 7:30 a.m. on Tuesday.

Typhoon Omais dissipated in the East Sea after passing through Jeju Island at Monday midnight.

All heavy rain alerts that were issued around at 2 p.m. on Monday were called off by 5 a.m. on Tuesday.

While Typhoon Omais has gone, rainy weather is expected to carry on until Thursday due to the low pressure from the typhoon, especially in the southern regions.

The Korea Meteorological Administration advised residents in these areas to remain alert as heavy rainfall and strong winds may continue.

Korea will feel Hinnamnor regardless of its path