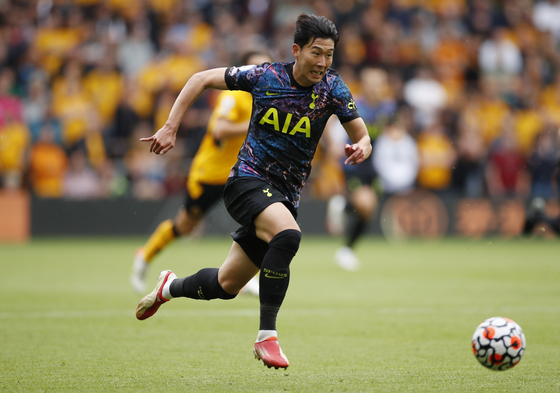 Son Heung-min of Tottenham Hotspur runs with the ball against Wolverhampton in a Premier League game on Sunday. [REUTERS/YONHAP]


Korean national football team head coach Paulo Bento on Monday announced his squad for the third round of World Cup qualifiers set to begin on Sept. 2.

The 26 players named to the squad include some of the K League's biggest stars, alongside a number of Koreans playing in leagues overseas.

First and foremost among the overseas players is captain Son Heung-min of Tottenham Hotspur, who is expected to once again lead the Taeguk Warriors through the latest round of qualifiers.

Despite a strong start to the 2021-22 Premier League season with Tottenham, there are some concerns about Son's fitness going into the international fixture.

Son scored Spurs' only goal against Manchester City in the opening game last week, starting the season with a bang after looking strong in the pre-season friendlies. But while Son appeared confident on the pitch, there were signs in Spurs' second game — against Wolverhampton on Sunday — that things may not be quite right.

Going into the game — a win for Tottenham thanks to a Dele Alli penalty — Son appeared to be struggling with knee pain, reaching down to rub his left knee a few times during the team's warmup and wearing tape throughout the game. He left the game after 72 minutes, making room for Harry Kane to make his first appearance this season.

No further information about any possible issues with Son's knee has been released. Speaking after the game, Tottenham head coach Nuno Espirito Santo admitted he didn't know what was wrong with Son.

"For now he's alright," Nuno said. "In the warmup, he had a strange feeling, but he was OK to play. I don't know. Let's assess him. I didn't realize. I'm sorry."

Bento, speaking at a press conference on Monday, said he had no reason to think Son wouldn't be able to play.

"Sonny, for me, is in good condition," Bento said. "As far as I know, he has no problems. The first game he played, he played 90 minutes. Yesterday, he played 72 minutes. In my opinion, he's OK and I have no information about any injury." 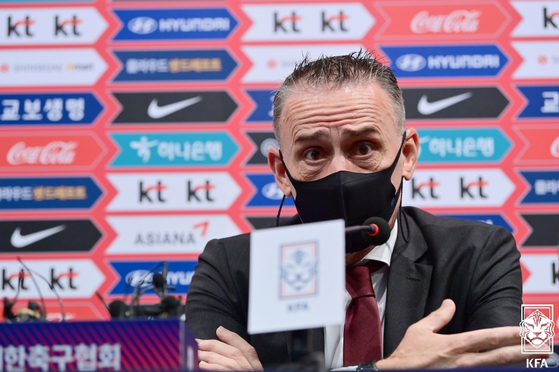 
Son has struggled with hamstring injuries in the past. In March this year he was called up for a friendly against Japan that he then had to sit out due to injury. Korea ended up losing the game 3-0.

On Tuesday, the KFA said that Son is expected to be fit.

"We've double checked that Son has no problems," said an official was quoted as saying by Yonhap. "As for now, it is OK to call him up to the national squad ahead of two World Cup qualifying matches in September."

The Taeguk Warriors were drawn alongside Iran, the United Arab Emirates, Iraq, Syria and Lebanon in Group A for the third round of Asian qualifiers for the FIFA Qatar World Cup.

Korea has four of those games this year — against Iraq on Sept. 2, Lebanon on Sept. 7, Syria on Oct. 7 and the UAE on Nov. 11. The match against Iran will be played in March next year.

Son is joined on the roster by some familiar faces, including Bordeaux striker Hwang Ui-jo and center back Kim Min-jae, who made his first appearance with Turkish side Fenerbahce on Sunday. Lee Jae-sung, who recently joined Mainz, Leipzig's Hwang Hee-chan and Rubin Kazan's Hwang In-beom complete the European players.

The midfield is also bolstered by the inclusion of Al-Duhail's Nam Tae-hee and Al Sadd's Jung Woo-young, both of whom have experience playing in the Middle East that could prove crucial against Korea's Group A opponents.

Son Jun-ho of Chinese side Shandong Taishan FC rounds off the big international contingent in midfield, with three K League players — Kang Sang-woo of the Pohang Steelers, Na Sang-ho of FC Seoul and Lee Dong-gyeong of Ulsan — completing the selection.

Hwang Ui-jo is joined up front by Kwon Chang-hoon of the Bluewings, Song Min-kyu of Jeonbuk and Cho Gue-sung of Gimcheon.

Son Heung-min looks back on a turbulent World Cup journey