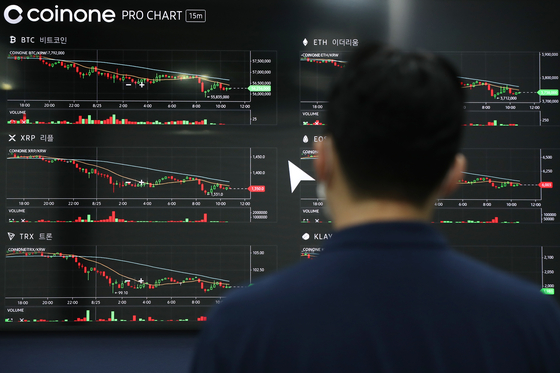 Cryptocurrency values shown on a display at Coinone's customer center in Yongsan, Seoul, on Wednesday. The government announced the current status of cryptocurrency exchange operators ahead of the Sept. 24 mandatory FIU registration. [YONHAP]

Only one cryptocurreny exchange has fully complied with new laws covering their operation and registration, while 21 are still trying to meet requirements set out to stay in business in Korea.

They have until Sept. 24 to comply.

Only one, Upbit, is in the final stages as it already has an agreement with a bank for real-name bank accounts, accounts in the name of the actual trader of the cryptocurrencies, for clients of the exchanges.

As of the end of July, 21 cryptocurrency exchanges received Information Security Management System (ISMS) certification provided by the Korea Internet and Security Agency (KISA), according to the Financial Services Commission on Wednesday,

Eighteen operators have either applied for or expressed interest in applying for the certification that would verify their security protection.

The remaining 24 operators now only have a month to apply or they will be forced to close in Korea.

The government has given a six-month grace period, which ends on Sept. 24, to comply to the newly enacted financial regulations, where all virtual asset service providers have to register with the Financial Intelligence Unit (FIU).

In order to get the approval, cryptocurrency exchange operators dealing in Korean won, including those based abroad, will have to meet two requirements – to receive ISMS certification and have client accounts under real names that are verified by banks.

The only cryptocurrency exchange operator that has met both condition is Dunamu, which runs Upbit. Dunamu has signed an agreement with K bank.

Those that fail will be deemed illegal and their executives could face up to five years in jail or a fine of up to 50 million won.

The purpose of the regulation is to increase accountability and transparency.

It is most likely that all 24 operators that have yet to start the necessary procedures are likely to be closed as it takes as three months to six months for authorities to review the applicant’s security systems before issuing certification.

Failure to reach an agreement with banks will prevent the exchanges from dealing in transactions involving the won, though crypto-to-crypto transactions could still be allowed.

The government for months has repeatedly warned operators to apply for the registration and about the possible damages that investors could face if one of the smaller exchanges fails.

“Those that traded on virtual asset service providers that have not yet applied for ISMS could face damages if these providers either suspend businesses or close shop,” said an FSC official. “Such investors have to take preemptive steps such as withdrawing investments.”

Even those that have applied for the ISMS certification must pass the final approval of the FIU.

According to the FSC, after consulting with 25 cryptocurrency exchange in June, it has found none met the requirements and were overall unprepared.

The other three major exchanges – Bithumb, Coinone and Korbit – have partnerships with banks, including NH Nonghyup Bank and Shinhan Bank, but they are still in negotiations about extending partnerships.

The banks are currently conducting due diligence on the cryptocurrency exchange operators.

Some argue that the government needs to give more time.

The Korea Blockchain Association released a statement arguing that the majority of the cryptocurrency exchanges are facing an existential crisis as they are struggling to get real-name bank accounts.

The government also reported that it has investigated 141 cases through the end of July and investigated and arrested 520 on charges of fraud regarding virtual asset investments.