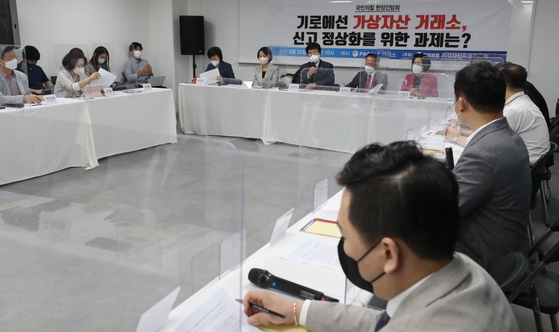 Rep. Yun Chang-hyun of the main opposition People Power Party, speaks during a briefing held Wednesday at the office of cryptocurrency exchange ProBit in Gangnam District, southern Seoul, held to discuss major tasks to for exchanges to register with the government according to an amendment to the Act on Reporting and Using Specified Financial Transaction Information. [YONHAP]


As the Sept. 24 deadline nears to complete their registration with the government, cryptocurrency exchanges are ramping up efforts to increase transparency in their businesses by scouting compliance experts and partnering with accounting firms.

Bithumb announced Wednesday that it hired Lee You-jeoung as its new head of compliance. Lee had previously headed compliance teams at the Seoul office of Goldman Sachs and Nomura Financial Investment Korea, according to Bithumb.

"Lee is a veteran compliance officer who has built a law-abiding culture at global financial companies for over 20 years," the exchange said in a statement. "She also has more than 10 years of working experience in the area of anti-money laundering and customer identification, which makes her just the right candidate for us ahead of registering with the [government.]"

Exchanges have until Sept. 24 to register as virtual asset business operators at the Korea Financial Intelligence Unit, the body under the Financial Services Commission (FSC) responsible for implementing anti-money laundering practices in Korea, under an amendment to the Act on Reporting and Using Financial Transaction Information that went into effect in March.

To register, the exchanges have two major tasks. One is to obtain Information Security Management System (ISMS) certification from the Korea Internet & Security Agency, ensuring they have achieved a certain level of information security. The second is to partner with commercial banks that can issue real name bank accounts, accounts in the name of the actual trader of the cryptocurrencies, for clients of the exchanges.

Even though Bithumb is the second-largest cryptocurrency exchange by trading volume in Korea, it has yet to register with the FSC body. It obtained the ISMS certification but hasn’t extended the contract with NongHyup Bank, which has been offering real-name accounts for the exchange's users, beyond Sept. 24.

Banks have been reluctant to partner with exchanges as they may be held responsible for money laundering or other financial crimes at exchanges. Exchanges are trying hard to show that they have the capabilities to prevent money laundering and show high levels of compliance with the country's legal system.

ProBit announced Tuesday that it has started recruiting employees for all of its departments, including compliance, engineering and finance, in order to strengthen capabilities in anti-money laundering and investor protection. The exchange has also obtained ISMS certification, but has not yet found a bank to partner with.

"We have already established an internal compliance system that is on par with those of financial institutions, but we are hiring more to further upgrade our systems," said Do Hyun-su, CEO of ProBit, in a statement. "We plan to continue bolstering our anti-money laundering efforts and offer safe trading environment for our users."

According to the FSC on Wednesday, Upbit, the country's largest cryptocurrency exchange by trading volume, is the only exchange to have completed registration with the FSC body so far, while 21 exchanges obtained ISMS certification as of the end of July.