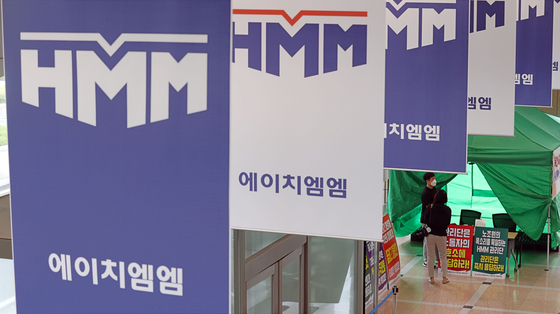 HMM’s union member representing crews on ships stand at the company’s headquarters in central Seoul on Wednesday as a way to demand a higher wage increase for this year. [YONHAP]


HMM’s union agreed to renegotiate a wage increase next week, putting off a threat of a mass resignation next Wednesday as a form of a strike.

The union, representing crews on ships, were planning to submit the resignations on Wednesday after they failed to agree with management on a wage increase for this year following two rounds of negotiations mediated by the National Labor Relations Commission (NLRC).

They announced the mass resignation, rather than a walkout, because Korean law doesn’t allow strikes on vessels operating outside of Korea.

On Tuesday, the two parties decided to negotiate again on Sept. 1.

The union said it collected the letters of resignation from its members on Wednesday.

The union argued that a 25 percent raise was necessary after wages were frozen from 2012 through 2019, and because earnings of the company have improved.

HMM’s net profit jumped more than 600 percent on year in the second quarter.

“Some of the union members individually submitted letters of resignation to the management,” said the union in a statement Wednesday. “If we continue to be treated like slaves, the rest of the 440 union members will leave the company to protect our families.”

If the union goes on any kind of strike for three weeks, around $580 million of operating losses could be suffered by The Alliance, one of the world’s three largest shipbuilding alliances, according to HMM.

HMM warned that a de facto strike could result in disruption of global transportation, which has already been impacted negatively by Covid-19.

The Shanghai Containerized Freight Index (SCFI), an index reflecting freight rates for export container ships from Shanghai, was 4,340.18 as of last Friday, up more than 250 percent on year.

The SCFI is projected to continue to increase through the second half due to seasonal reasons.

"Usually, trade volumes in February are around 13 percent lower than in January," said Nah Min-sik, an analyst at eBest Investment & Securities.

The Korea Shipowners’ Association urged labor and management to settle their wage dispute.

“If the union really goes on a strike, struggles by Korean exporters will worsen and it will seriously hurt the Korean economy,” said the association in a statement Wednesday.

It asked the government to help settle the dispute.

HMM is 24.96 percent owned by the Korea Development Bank.

The other HMM labor union, representing workers on land, plans to hold a vote on Monday to decide whether to go on a strike.

The union had three rounds of negotiations with management mediated by the NLRC.