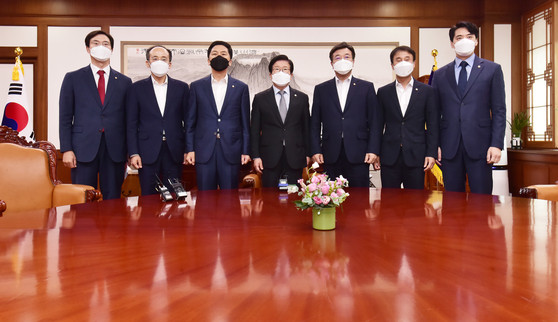 National Assembly Speaker Park Byeong -seug, center, poses with floor leaders of the ruling and opposition parties on Wednesday to review the schedule for the plenary session at the National Assembly in Yeouido, western Seoul. [YONHAP]


The "Anti-Google law" is just one vote away from becoming a law and making Korea the first country in the world to force the unbundling of billing and in-app purchases.

It was passed by the Legislation and Judiciary Committee on Wednesday and can now be voted on Aug. 27 or Aug. 30 during the plenary session.

The bill is a revision of the Telecommunications Business Act. It bars app store operators like Google and Apple from requiring the use a specified billing systems for in-app purchases.

App users will be allowed to use the payment system of their choosing after the passage of the law.

For the tech companies, the law could lead to an erosion of profits as they had been forcing app customers to pay via their own in-house payment systems, which charged high rates for settlement.

Last July, Google announced that it will require all apps use its billing system, which charges a 30 percent commission on in-app purchases. At present, only gaming apps are required to use the designated billing system when listed on Google Play Store.

“The proposed Telecommunications Business Act will put users who purchase digital goods from other sources at risk of fraud, undermine their privacy protections, make it difficult to manage their purchases, and features like “Ask to Buy” and Parental Controls will become less effective,” Apple said in a statement.

“We believe user trust in App Store purchases will decrease as a result of this proposal—leading to fewer opportunities for the over 482,000 registered developers in Korea who have earned more than 8.55 trillion won to date with Apple,” it said.

Julie Tarallo McAlister, a Google communications & public affairs manager, told the New York Times that the company was open to “exploring alternative approaches” but still voiced concerns that the legislation could harm consumers.