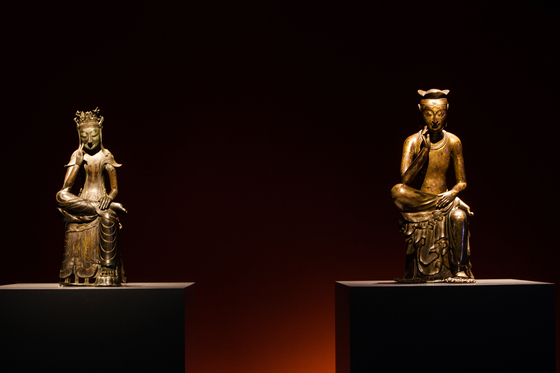 A special exhibition in 2015 organized by the National Museum of Korea shows two Maitreyas in meditation — National Treasure No. 78, left, and No. 83, right — sitting side by side. [NATIONAL MUSEUM OF KOREA]


The National Museum of Korea said on Wednesday that it is inviting the public to submit nicknames for the two Maitreyas in meditation, also known as the pensive bodhisattva.

According to the museum, it decided to launch the “Maitreyas in Meditation Nickname Competition,” to give Korea’s two important relics a chance to “become closer to the public prior to opening up the permanent exhibition room for them on Oct. 28.

Shortly after taking office, Min Byoung-chan, the director-general of the National Museum of Korea announced early this year that he’ll bring together the two treasures in one place permanently so that they become “the representative relics of the National Museum of Korea.” The museum has been exhibiting one bodhisattva at a time so that one can be stored or go on an overseas tour while the other one is on display in the museum.

Anyone can participate in the competition online (museumpensive.dev-dnad.kr/contest/main.php). Submissions must be made before Sept. 30. A total of 21 winners will be announced in October. The winner of the Grand Prize will be awarded 1 million won ($856.60).

The two Maitreyas in meditation are currently in storage.