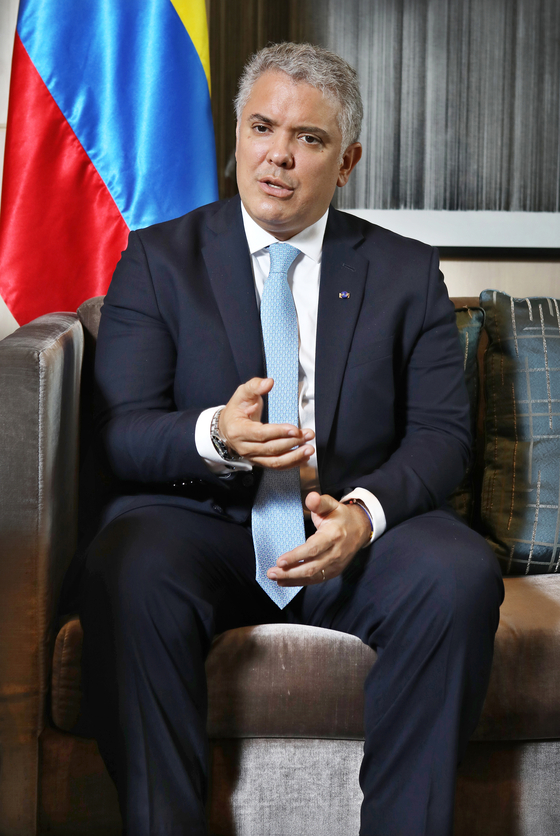 Colombian President Iván Duque Márquez sees more than just 60 years of bilateral ties when he looks at the friendship between Korea and Colombia.

“It’s about the present, the past and also the future,” said President Duque on Wednesday, the second day of his three-day state visit to Korea, marking the first time in 10 years for a Colombian president to visit Seoul.

Duque’s visit to Korea, also the first state visit from a Latin American country since the onset of the Covid-19 pandemic, comes in time for the 70th anniversary of the start of Colombian participation in the Korean War (1950-53), 10th anniversary of the elevation of bilateral ties to a strategic partnership and a year in the lead up to the commemoration of 60 years of diplomatic ties between the two nations.

Considering the timeline of major events in the bilateral ties and the common challenges currently facing the two nations such as the pandemic and climate change, Duque, speaking with the Korea JoongAng Daily after his summit with President Moon, said that he is convinced “this is the most important visit that a Colombian president has ever [had] in Korea.”

The visit, originally planned for April 2020, was postponed over coronavirus concerns. But Duque and Moon, both having met the pandemic in the middle of their presidencies, began communicating with each other to share Covid-19 response strategies. The two held a phone call that month, which was followed up with health worker training sessions and exchanges and sales of goods such as masks, test kits and equipment from Korea to Colombia.

“President Moon and Korea have become a reference for the world in the pandemic management,” Duque said. “I think in Latin American standards, Colombia has also been a good reference in a sense that we were able to duplicate our I.C.U. capacity, expand our labs, and we’re also accelerating the vaccination process. So in this sense we have had a lot to share with each other.”

The two countries’ population, both around 50 million, have reached similar rates of vaccination. Half of Korea’s population has received their first dose of Covid-19 vaccine, and around 43 percent in Colombia has done so. Around 28 percent of Colombians and 23 percent of Koreans are fully vaccinated.

Bilateral cooperation on vaccine research and even potential production was one of the key agendas of his conversation with Moon, Duque said.

“Today we signed more than four memorandums of understanding [MOU], and one of most important ones is regarding the health sector — it is the first MOU Korea has signed with another country in the world dealing with the issue of pandemic,” Duque said, referring to the agreement signed between Korea’s Foreign Ministry and Colombia’s Ministry of Health and Social Protection to strengthen their cooperation in the Covid-19 response.

The agreement, Duque said, will help the two nations work on potential vaccine research and development, and even result in some Korean pharmaceutical companies to “fill and finish in Colombia.”

Duque met with executives of SK Bioscience earlier on Wednesday, as well as executives of Lotte Group and CJ Group. Later in the afternoon he registered Colombia as a partner country at the International Vaccine Institute in Seoul.


This isn’t the first time the two nations have stuck through a difficult time together.

Colombia was the only South American nation to answer the United Nations’ request for military assistance to South Korea at the outbreak of the Korean War in June 1950. The country sent 5,100 soldiers and sailors to Korea from May 8, 1951, to Oct. 11, 1954.

Two Colombian veterans of the war — Guillermo Rodriguez Guzman, 91, and Alvaro Rozano Charry, 87 — have joined President Duque’s visit. President Moon presented them each with an Ambassador for Peace Medal at the state dinner he hosted for President Duque and his delegation at the Blue House on Wednesday.

Rozano is a survivor of the Battle of Old Baldy, the bloodiest battle for the Colombian battalion during the war, during which they are said to have lost 95 soldiers and sustained 97 additional injuries. Throughout the war, 140 Colombians were killed in action, 71 went missing in action, 609 were wounded in action and 22 were captured but repatriated, according to the Colombian Embassy in Korea.

An agreement to facilitate the return of the remains of the missing Colombian soldiers was signed between the Colombian and Korean governments on Wednesday.

“The veterans came here to an unknown territory, but they came here to protect liberty, to protect democracy and to help Korea develop in the midst of a very complex situation,” Duque said. “And they came, never imagining that their contribution to history besides the war was going to be the anchor of what would be a developing relationship that is going to be celebrating 60 years in 2022.”

Colombia and Korea established ties in 1962. Six state visits have taken place since then, including President Duque’s visit, with the last one in Korea dating back to 2011. That year, the two nations elevated their relations to a strategic partnership. In 2013, the two countries signed an FTA, a first for Colombia to sign with an Asian country, which was enacted in 2016.

Duque, the youngest president to be elected in Colombia, often draws from his experiences at the Inter-American Development Bank (IDB), where he held various positions including chief of the organization’s Culture, Creativity, and Solidarity Division from 2001 to 2013.

It was during his time at the IDB that he came to eye Korea’s policies on tech innovation and creative industry. Duque’s administration has put forward signature policies focusing on the creation of a pro-business environment for the cultural and creative sectors, bound under the umbrella term, Orange Economy.

“I have been an admirer of Korea throughout my life,” Duque said. “I believe this is a country that has resilience, a country that has evolved at a very fast pace, when you look at the transformation it has experienced in a matter of 70 years.”

Korea and Colombia already have a handful of projects in this sector, including a recent, nearly $5 million investment by Kia on a new production platform in Colombia for next-generation vehicles, and a $60 million production of film “Bogota” starring actor Song Joong-ki that has been filmed across sets in Colombia and Korea.

In his conversation with Moon on Wednesday, Duque also highlighted how his administration’s Covid-19 recovery deal announced last September was inspired by Korea's Green New Deal.

“President Moon and I talked about science, technology and innovation, because that is part of the agenda of the Korean New Deal, which is calling for society to look for a more digital, more sustainable and more inclusive type of growth in a post-pandemic world, and those are also the elements of our strategy in Colombia,” Duque said.

Colombia intends to reduce 51 percent of its carbon emissions by 2030 compared to its 2014 levels and be carbon neutral by 2050.

Energy transition takes up a big part of this process, and Colombia has invited more Korean companies to take part in its projects.

“Our nonconventional renewables have grown from 0.2 percent of our energy matrix to 14 percent during my administration,” Duque said. “We will have 20 times more projects on these renewables by the end of my administration, and we want more Korean companies to participate in these projects, especially now that we have a new energy transition bill.”

Colombia has taken the baton from Korea this year to host the next Partnering for Green Growth and the Global Goals 2030 (P4G) summit in 2023.

“Korea welcomes President Duque’s proposal for an alliance on innovation and expects that if many Korean companies can participate in the digital transformation and eco-friendly infrastructure projects of Colombia, it may bring forth a new era of inclusive digital and green cooperation between the two countries,” the Blue House said in a statement on Wednesday.

The two leaders also discussed cooperation in the fields of agriculture, finance and security during the summit, the Blue House said.

“The Korean government is making every effort to bring the Korean Peninsula peace process back into operation, and we ask for the continued support and cooperation of Colombia,” Moon was quoted to have said in his conversation with Duque, according to the Blue House.

“As we were partners and allies during the [Korean] War, to protect the values and principles, today we are also allies to promote and protect peace-building in our nations,” Duque said.


President Duque was accompanied by a delegation made up of the Colombian Ambassador to Korea Juan Carlos Caiza; the Chief of Staff of the Presidency María Paula Correa; the ministers of health, Fernando Ruiz; commerce, María Ximena Lombana; environment, Carlos Correa; agriculture, Rodolfo Zea; mines and energy, Diego Mesa; and Culture, Angélica Mayolo, as well as the Director of iNNpulsa, Francisco José Noguera, and a delegate from the Ministry of Foreign Affairs.