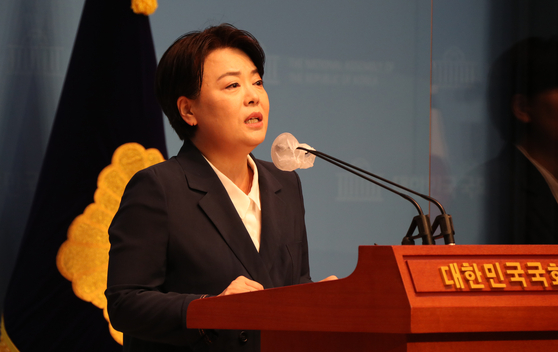 Rep. Yun Hee-suk of the People Power Party on Wednesday announces her decision to resign from the post on Wednesday. [YONHAP]


Rep. Yun Hee-suk of the main opposition People Power Party (PPP), a political rookie who has built her national profile through defiance of the Moon Jae-in administration’s real estate policy, on Wednesday said she will give up her seat and presidential bid over a suspicion surrounding her father’s properties.

“I am returning the representative post of Seocho A District [of Seoul] to its voters and the people,” Yun said in a press conference at the National Assembly on Wednesday. “Starting now, I will also stop my journey for the party’s presidential primary.”

Yun, 52, is an economist and former researcher of the Korea Development Institute who won her first lawmaker seat in the April 2020 general elections. Her five-minute speech at the National Assembly in July 2020, criticizing the ruling Democratic Party (DP) for newly passed rent control bills and the administration’s real estate policy, made her a rising political star.

Yun’s decision to resign followed the Anti-Corruption and Civil Rights Commission’s announcement that her father had violated a law governing farm land. After combing through property transactions of 116 lawmakers of six opposition parties and their families, the commission announced Monday that it discovered 14 cases of suspicious property transactions involving 13 opposition lawmakers. The commission did not release their names, but said 12 were PPP lawmakers.

The PPP announced the names of the 12 lawmakers on Tuesday, and Yun was among them. Although the party leadership decided to take no punitive action against Yun after listening to her explanation about her father’s land deal, Yun announced Wednesday her decision to give up her post.

According to Yun, her father purchased farm land in 2016 in Sejong City. He planned to farm the land himself, but eventually rented the property out to a tenant and received rice in return every year. The commission said her father had changed his residential address from Seoul to Sejong and then to Seoul again during the process, accusing him of violating the Farmland Act and Resident Registration Act.

“My father purchased the land in 2016 to spend the rest of his life as a farmer, but he could not do so because my mother’s health condition suddenly worsened,” Yun said. “He, therefore, signed a contract to rent the land out through the Korea Rural Community Corporation.”

She said she has no knowledge about her father’s economic activity ever since she started living separately from her family, 26 years ago.

Yun, then, questioned the integrity of the anti-corruption commission and said the probe was intended to scratch her reputation as an opposition lawmaker. “The probe is ridiculous,” she said.

Yun said she thought seriously about what she could do to contribute to the party’s victory in next year’s presidential election, and concluded that she must give up her post.

“The Moon administration’s failure to cool down the skyrocketing real estate prices and speculative investments made by Moon’s key allies are the most important issues in the upcoming election,” Yun said. “I have fought against the issues from the front line, and I feel broken to think that my case from this ridiculous probe will undermine the party’s crucial chance in the presidential election.”

Yun continued on to say she wanted to set an example and give up the lawmaker post in order to prove her sense of responsibility to the people and relay the people’s support for her.

Asked about the possibility that her resignation motion may not pass the National Assembly, Yun said, “The DP is the majority party, and it will be more than happy to pass it. I cannot imagine that they will not do so, since I have been the fiercest attacker of the ruling party’s presidential candidates.”

Yun is the first lawmaker to offer to resign since the anti-corruption commission conducted two sets of probes on representatives and their families’ real estate dealings. The first probe into the DP discovered 16 cases of suspicions transactions concerning 12 lawmakers, and the second probe showed 14 cases involving 12 PPP lawmakers and one Open Minjoo Party representative. None, except Yun, have expressed an intention to step down.

PPP leaders and lawmakers including Chairman Lee Jun-seok came to the press conference and tried to dissuade her. Shedding tears, Yun told Lee that “this is my way of politics.” 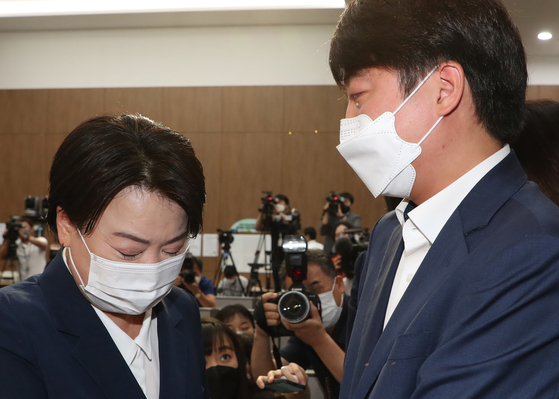 
Lee also said through tears, “I am confident that there is nothing Yun must be held accountable for. I will strongly dissuade her. Yun is a sharp sword which has the best role when in the National Assembly.”