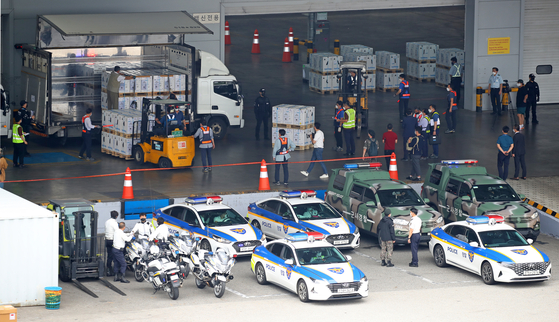 Workers load boxes carrying 1.6 million doses of Pfizer's Covid-19 vaccine, which the government has procured through a direct contract with the pharmaceutical giant, onto a truck at Incheon International Airport on Wednesday. [YONHAP]


The government predicted that Korea’s Covid-19 cases will hit a peak after the Chuseok harvest holidays in mid-September, as cases hover around 2,000 despite the stricter distancing measures implemented for over a month.

“Even if the virus situation proceeds stably, we believe the cases will gradually increase from Chuseok through the end of September and hit a peak, then decrease afterwards,” Jung Tong-ryung, Pandemic Response Coordination Team leader at the Korea Disease Control and Prevention Agency (KDCA), told reporters Wednesday.

KDCA commissioner Jeong Eun-kyeong also made a similar forecast Tuesday, saying, “Although it is hard to predict at the moment, I believe [the fourth wave] won’t peak and drop sharply, but will progress until September and then slow down.”

What the government will do as far as any special new anti-virus measures for the upcoming Chuseok holidays, which fall from Sept. 18 to 22 this year, are piquing social interest.

From the start of the pandemic until now, the government has come up with additional preventive measures to implement during the nation’s biggest holidays such as over the Lunar New Year holidays in February and the Chuseok harvest holidays in September.

Under the current distancing measures applied across the country, gatherings of more than four are banned, including family members, unless they are living under the same roof.

If such measures are maintained over Chuseok, many families will have to cancel their gatherings and the traditionally-held family ancestral rites.

As millions of people normally travel across the country to visit their families over the holiday, health authorities announced Wednesday that seats on train rides will be limited to window seats only from Sept. 17 to 22 — similar to last year.

While explaining that although there have not yet been any reported clusters from trains, officials said they may decide later to allow sales of the remaining seats depending on the virus situation.

Meanwhile, the government earlier declared they expect at least one dose of a Covid-19 vaccine will be given to 36 million people, or 70 percent of the population, by Chuseok.

Addressing the country’s vaccination rate, Park Hyang, director of antivirus measures at the Central Disaster Management Headquarters, said, "We’re expecting to have nearly 70 percent of the population given [at least] one dose, and around 50 percent fully vaccinated [by Chuseok],” adding that the government will review its virus measures considering such a vaccination rate. 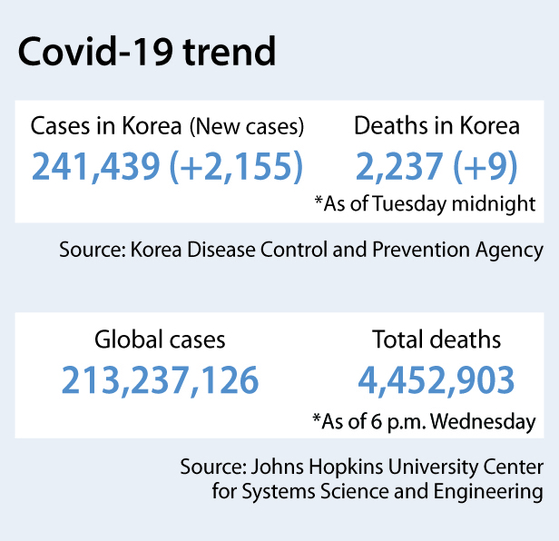 Of Wednesday's new cases, 2,114 were locally transmitted and 41 came from overseas.

The number of critically ill patients reached a new high two days straight with 434 on Wednesday.

Nine more deaths were reported, bringing the death toll to 2,237.

Health authorities expressed deep concerns over the alarming amount of the Delta variant found in the country's recent infections, as it has clearly become the dominant virus strain.

“The Delta variant is found in nine out of ten Covid-19 cases in Korea,” Prime Minister Kim Boo-kyum said in a Covid-19 response meeting on Wednesday.

People infected with the Delta variant are found to have a viral load 300 times higher than those with the original coronavirus when symptoms are first observed, according to a study from the KDCA.

After conducting an analysis on 1,848 samples of Delta patients and 22,106 samples of patients with other strains, the KDCA said Tuesday that the viral load from Delta gradually decreased to 30 times in four days and over 10 times in nine days, and finally had similar levels of the virus as the original coronavirus on the tenth day.

This shows that the Delta variant produces a much higher amount of the actual virus within the body, but it does not mean it is proportionally that much more infectious, health authorities added.

The Delta variant has also put a dent in the effectiveness of Covid-19 vaccines, according to the U.S. Centers for Disease Control and Prevention (CDC) Tuesday, reducing efficacy for some vaccines by about 25 percentage points since the variant became the dominant strain of coronavirus in the U.S.

The CDC released a study which found messenger RNA-based vaccines, like Pfizer or Moderna, dropped in efficacy from 91 percent prior to the Delta variant's emergence, to 66 percent after the rise of the strain in the summer.

“The current wave caused by the Delta variant is completely different from the ones before,” the prime minister said.

“As seen in many countries around the world, if we let our guard down even for a second, an explosive surge will be unavoidable,” Kim added, urging health authorities and local governments to maintain a swift and thorough virus prevention status.