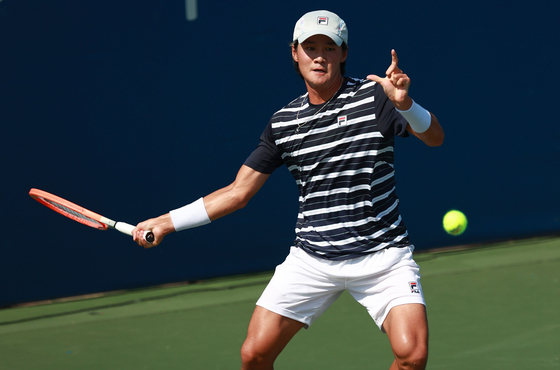 Kwon Soon-woo returns a shot to Pablo Carreno Busta of Spain on Day 4 of the Winston-Salem Open at Wake Forest Tennis Complex on Aug. 24 in Winston Salem, North Carolina. [AFP/YONHAP]


Kwon Soon-woo was knocked out in the round of 32 at the ATP Tour Winston-Salem Open, losing to Pablo Carreno Busta of Spain two sets to one, on Tuesday evening.

Things were close at Wake Forest University in Winston-Salem, North Carolina — Kwon, ranked 74th in the world, outperformed expectations by taking world No. 12 Busta all the way to the final set and going up to 3-3.

Although Kwon ended up losing the set 6-4 and dropping out from the tournament, it still was a good showing against a top player who very recently beat world No. 1 Novak Djokovic at the Tokyo Olympics.

It was also a huge improvement on his previous match against Busta at the Andalucia Open this April, which he lost 2-0 in relatively uninspiring fashion.

Kwon's next competition is the US Open, the final major of the season. The US Open will kick off on Aug. 30 in New York.