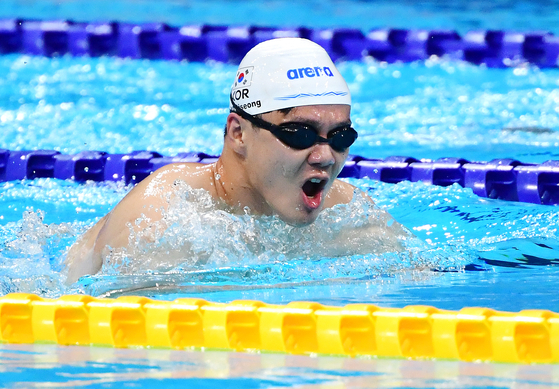 
Korean swimmers Jo Gi-seong and Cho Won-sang both reached their respective finals as the swimming competition at the 2020 Tokyo Paralympics got underway Wednesday at the Tokyo Aquatics Centre.

Jo finished sixth out of the eight swimmers in the SB3 men’s 50-meter breaststroke finals with a record of 51.58 seconds. Jo started in lane seven, competing alongside Roman Zhdanov of Russia, who swam a world record 46.49 seconds to win the gold medal.

Swimmers who can use their arms and hands but not their trunk or legs compete in the SB3 class. Jo was born with cerebral palsy and started swimming to assist his rehabilitation.

Jo is a world-class swimmer, having previously won gold medals in the men’s 50 meter, 100 meter and 200-meter freestyle at the 2016 Rio Games. But Jo hadn't entered the men's 50 meter breaststroke before Tokyo, making reaching the finals an impressive achievement.

Earlier in the day, Jo finished sixth out of the 12 swimmers in the preliminaries, where the top eight advanced to the finals. Jo swam the 50 meters in 53.11 seconds.

Just before Jo's race, countryman Cho finished seventh in the S14 men’s 100-meter butterfly final race. S14 swimmers have an intellectual impairment that impacts their performance in the sport. 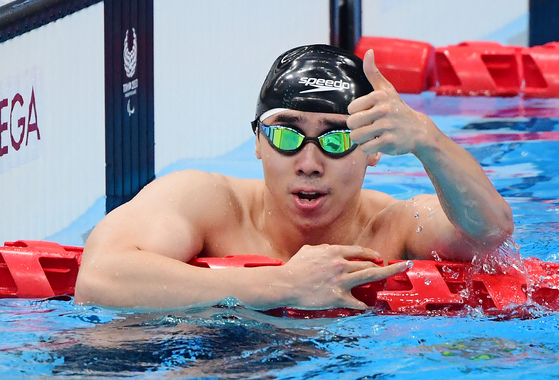 Cho Won-sang gives a thumbs up after finishing seventh out of eight swimmers at the S14 men’s 100-meter butterfly final race at the Tokyo Aquatics Centre in Tokyo on Wednesday evening. [JOINT PRESS CORPS]


Cho swam in lane eight alongside world-class swimmers like Gabriel Bandeira of Brazil, who set a new Paralympic record of 54.76 seconds on the big stage to take gold.

Cho has one more chance left to medal, as he will be competing in the men’s 100-meter backstroke starting Thursday.