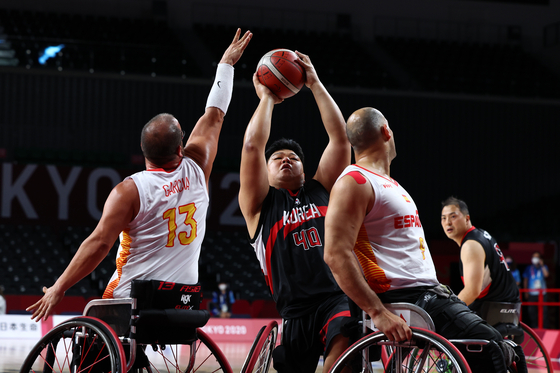 Korea's Gim Dong-hyeon takes a shot against Spain in a Group A game in the men's wheelchair basketball competition at the 2020 Tokyo Paralympics at Musashino Forest Sport Plaza in Tokyo on Wednesday. [REUTERS/YONHAP]

Korea put up a good fight against the Rio 2016 Paralympic silver medalists, rallying in the second half of the game and coming within a few points of taking the lead before Spain finally pulled ahead again in the fourth quarter.

Spain took the first quarter 16-10, taking an early lead that Korea spent nearly two hours chipping away at. The second quarter was closer, at 15-14, putting the score at 31-24 at the halfway point.

Korea started the second half strong, taking the third quarter 16-12 to put Spain ahead by just a few points going into the fourth, 43-40.

Korea managed to get within two points of Spain, with the score at 46-44 with five minutes left on the clock, before the Rio silver medalist quickly pulled ahead with a flurry of free throws and a three pointer putting the score out of Korea's reach.

Despite a last minute scramble, the damage was done and Spain held an insurmountable lead, taking the game 65-53.

Spain was always going to be a tough opponent for Korea. While the European side took silver at the Rio Paralympics, Korea didn't even make it to the competition.

Korea is in Group A at the Paralympics, alongside Spain, Canada, Colombia, Japan and Turkey. The team will next take on Turkey at 5 p.m. on Thursday.