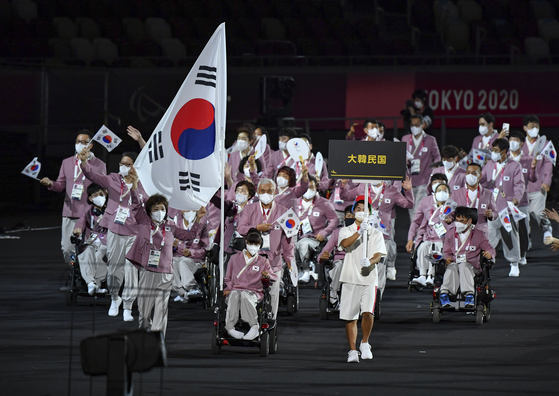 Team Korea parade into the Olympic Stadium during the opening ceremony of the Tokyo 2020 Paralympic Games in Tokyo, Japan on Tuesday. [XINHUA/YONHAP]


The Olympics are over, now the real Games begin.

The 2020 Tokyo Paralympics officially launched on Tuesday evening, as athletes from 162 countries gathered in the Olympic Stadium in Tokyo for the Paralympic Opening Ceremony.

With Boccia player Cho Ye-jin bearing the Korean flag at the front of the group, 86 athletes from Team Korea entered the stadium. Twenty-year-old table tennis player Yoon Ji-yu is the youngest member of the squad, while 62-year-old archer Kim Ok-geum is the oldest.

China brought the biggest team, consisting of 251 athletes. It is also the most decorated country in the last three Paralympics, topping the medal table at the 2008 Beijing Games, 2012 London Games and the 2016 Rio Games, where China tallied 107 gold medals.

During the Opening Ceremony, every single athlete's name was listed on an electronic display surrounding the Olympic Stadium as they entered for the first time.

“I cannot believe that we are finally here,” said Andrew Parsons, president of the International Paralympic Committee, during his speech.

"These Games had to happen because they are the most important Games in history. These are bigger than just 4400 athletes being here; this is about using sport to change the lives for 1.2 billion people with disabilities in the world."

“You are the best of humanity, and only you can decide who you are.”

Korea's first chance at a medal will come on Wednesday when Cho Won-sang and Lee In-kook compete in the S14 men’s 100-meter butterfly race.