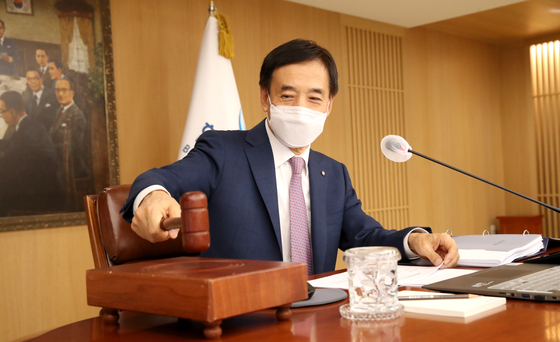 Bank of Korea Gov. Lee Ju-yeol beats a gavel during a monetary policy board meeting held Thursday. The board decided to raise the country's base interest rate by 25 basis points to 0.75 percent. [BANK OF KOREA]

It was the first time in 15 months that the monetary policy board of the central bank changed the key rate and the first interest rate rise in 33 months. For 15 months the rate was at a record low of 0.5 percent.

The central bank has been signaling a potential rate hike since May as household debt grows to a dangerous level and asset prices keep rising.

According to data from the central bank Wednesday, household debt rose by 10.3 percent on-year in the second quarter to over 1,805 trillion won ($1.5 trillion), a new record, despite warnings of a rate hike. Real estate prices in the greater Seoul area have been rising at record speeds for the past six weeks, with on-week price growth hitting 0.4 percent last week, a recent high.

"A year and a half of unusually accommodative policies have brought a side effect to the market, which is financial imbalance," BOK Gov. Lee Ju-yeol said during an online briefing with reporters held Thursday. "Now the [central bank] is focusing on resolving this imbalance, and we have just begun our steps to normalizing our policies with the latest rate hike."

Until Thursday, expectations had been split on whether the central bank would become the first major Asian economy to raise rates. With daily Covid-19 cases surpassing 2,000 lately, tight social distancing measures have slowed down any recovery in consumer spending, and many thought rates would be frozen.

Even within the six-member monetary policy board, the hike wasn't unanimous. One member of the board, Joo Sang-yong, voted for freezing rates. It was the first board meeting since Koh Seung-beom, known for his hawkish stance, left the board last week. Koh has been nominated to head the Financial Services Commission.

However, with Lee determined to normalize the country's monetary policy, more rate hikes could come this year.

"We have raised the rates by 25 basis points, but the rate is still accommodative," Lee said. "The central bank plans to gradually adjust the degree of accommodation in our policies that have been much expanded in the past."

His hawkish stance may depend on progress in vaccinations in the country, and hopes for the stimulative power of a supplementary budget expected to boost the economy in the latter half of the year.

The central bank also kept this year's gross domestic product growth projection at around 4 percent, consistent with its forecast in May, saying that "although private consumption has somewhat slowed due to the coronavirus resurgence, exports have sustained their buoyancy and facilities investment has shown a robust trend" in a statement Thursday.

Questioned about the timing of any additional tightening, Lee said, "We shouldn't rush, but at the same time not be late." Multiple factors need to be taken into consideration, he said, such as containment of the coronavirus, changes in the U.S. Federal Reserve's policy stance as well as progress of the local economy. 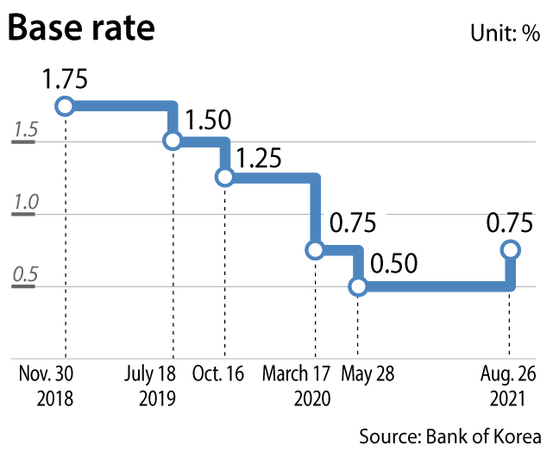 Some analysts are expecting another rate hike in November.

There are two monetary policy board meetings left this year, in October and November.

"We believe another rate hike could come as early as November this year," said Kim Ji-man, an analyst from Samsung Securities. "We should be open to chances of another rate hike within this year rather than a delayed hike next year when a number of big events are expected such as the presidential election."