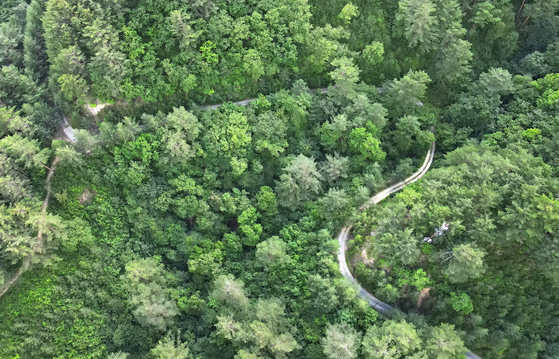 An aerial view of Uljin Geumgang Pine Tree trail in Uljin County, North Gyeongsang. It is one of the largest colonies of geumgang pine tree in Korea, whose lumber was used to make royal coffins. [SOHN MIN-HO]

The trees along Geumgang Pine Tree trail in North Gyeongsang may look a little different to the ones you might see in your neighborhood. The reason why is their age — two centuries old.

The Uljin Geumgang Pine Tree trail lined by the 200-year-old trees has seven different routes, each of which is limited to 80 people per route in order to protect these specimens.

The forest measures some 37.05 square kilometers (14.3 square miles), which is equivalent to 5,189 soccer fields. The government is involved with the protection of this forest because of the particular type of pine tree that grows there. The geumgang trees account for about 60 percent of the forest, which is believed to be the largest colony of this variety of pine trees in the country, according to Cho Byung-Chol, director general of the South Regional Office of Forest Service.

The seven routes take visitors to every corner of the well-protected and well-preserved forest. The condition of the forest is in part thanks to the government which has joined hands with many different groups and experts in the private sector to protect the trees and maintain the trail.

In times gone by, geumgang trees were used to make coffins for the royal family. Compared to other varieties of pine tree, they are about three times as dense which means their trunks grow strong and straight. In addition, geumgang have relatively less resin compared to other pines, so they don't rot as quickly.

In the Joseon Dynastry (1392-1910),the government forbade people from trespassing on the mountain and anyone found breaking this rule was punished with 100 lashes. One record indicates that citizens were prohibited from entering the geumgang pine tree forest in Uljin from 1680 to protect the trees. To this day, a stone post remains with a message carved into it that warns trespassing is prohibited from this point.

A similar stone post can be found in Gangwon’s Inje and Yeongwol County and Wonju city, as well as North Gyeongsang’s Mungyeong city, all of which have forests of geumgang pine. Of all the geumgang forests, the one in Uljin is the best kept partly because the county wasn’t easily accessible due to a lack of well-paved roads connecting to other regions.

Thousands of geumgang pine trees were cut down during the Japanese Colonial Rule (1910-1945), but relatively less damage was done to the forest in Uljin due to such transportation restrictions. The oldest trees can be found in the hardest areas to reach.

Although the exact number of pine trees growing in Uljin is unknown, it is estimated that there are 85,000 trees that are over 200 years old. Three trees are believed to be over 500 years old. 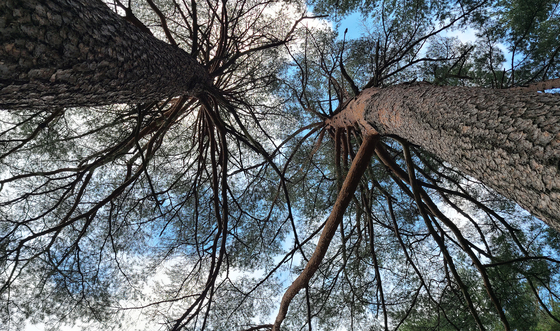 
The Uljin Geumgang Pine Tree trail is the first forest trail created by the Korea Forest Service that was funded by taxpayers. The blueprint to pave the trail was created in 2008 and three courses that measure a total of 40 kilometers long were open in 2011. Four additional courses were added bringing the total length of the trail to 79.18 kilometers. The trail takes people to some privately-owned areas as well as areas that have been designated to be protected. Reservations are a must to walk the trail and you will be assigned a forest guide to accompany you along the way.

Of all the courses, the seventh is the most popular. It is family friendly and measures some 5.3 kilometers in length. Its starting point is at the pine tree eco-management center and it loops around the forest. It is popular because it is the shortest of the courses, but there's still plenty to see. The seventh course offers visitor a chance to see two geumgang pine trees that are over 500-years-old and are under government protection. One of the trees was estimated to be 530-years-old when it was examined in 1982, so it is likely that it is 560 years old now.

Inside the forest, visitors can spot another tree under government protection, called Ugly Sonamu. Sonamu means pine tree in Korean. Its ugly moniker, however, is deceiving.

“It is labeled ugly because it doesn’t have much value as lumber,” said Cheon Dong-su an official with Uljin National Forest Stations. “It doesn’t mean that it’s not pretty to look at.”

The same logic applies to a tree that’s over 200-years-old called “Beauty.” Its thick and straight trunk is big enough for two adults to wrap their arms around.

After walking along the trail for some time, you will get to the observatory where you can enjoy a view of the entire pine tree forest.

Intimidatingly large pine trees as well as newly budding trees stand side by side.

The first course to open is called Bobusang. Bobusang were Joseon-era merchants who carried all the items they sold in their backpacks. The course is named after the merchants because of the hills that many bobusang used to walk to get to other regions in North Gyeongsang from towns in the east coast. It is about 13.5 kilometers long. The Bobusang course has four major hills and is considered the toughest of the seven. 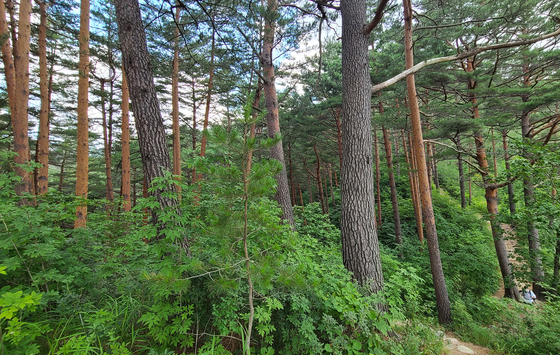 Geumgang pine trees are known to grow straight up and close together, making them excellent for premium lumber. [SOHN MIN-HO]


An accompanying forest guide tells trail visitors stories about such merchants from the Joseon era, including where they used to take a break and what kinds of items they were carrying in their backpacks. Since so many people have walked the area for centuries, fewer geumgang pine trees are spotted here.

The Uljin Geumgang Pine Tree trail has been a model for other regions hoping to expand into eco-tourism. It is not just because of the grandiose natural scenes, but also because of the role the Korea Forest Service takes in caring for the forest, in tandem with local residents.

Visitors walking the seven courses can enjoy lunch made by the locals. The menu varies depends on what’s available in each village. Some offer a lunch box while others make bibimbap (a Korean rice dish mixed with vegetables and meat). For those who want to stay overnight, the village residents work together to operate guesthouses. The forest guides are all locals as well.

The sign for Uljin National Forest Stations shows the annual income of each village. Before the Covid-19 pandemic, the average for each village was 200 million won ($170,890), but as of last year that amount had dropped to 65 million.

Lunch is priced at 7,000 won and you'll need to let officials know you'd like a meal while making your reservation or before starting the hike. Lunch can only be paid for with cash.