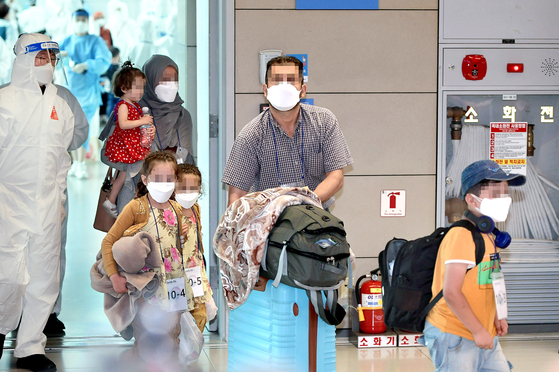 A group of 378 Afghans who worked with the Korean government over the years and their families, including many young children, arrive at Incheon International Airport Thursday afternoon. [JOINT PRESS CORPS]


A group of 378 Afghans who worked with the Korean government over the years and their families — including many young children — arrived in Korea Thursday afternoon on a military aircraft.

An additional 13 who couldn't fit on the first plane will be coming soon.

These Afghans will eventually be granted F-2 long-term residency visas, announced the Justice Ministry Thursday, because of their "special contributions" working for Seoul's embassy in Kabul or on Korean humanitarian aid projects in Afghanistan. This will require a revision to the current immigration law.

They will be able to freely live and work in the country, equivalent to what refugee status would have granted them.

The Afghans airlifted from Kabul in a speedy operation led by the Korean government landed at Incheon International Airport at 4:24 p.m., according to Seoul's Ministry of Foreign Affairs.

They departed from the Pakistani capital of Islamabad early Thursday on a Korean Air Force KC-330 multi-role aerial tanker, traveling some 9,000 kilometers after being flown out of Kabul on Tuesday and Wednesday.

The Foreign Ministry revealed Wednesday that the Korean government was in the process of airlifting 391 people from 76 households from Afghanistan.

Nearly half, or some 180, are children under the age of 10, according to a Defense Ministry official, and 100 are under five, including three infants born just this month.

The remaining 13 evacuees from three families were forced to stay in Islamabad because of a lack of space on the KC-330 tanker, which can seat around 330 passengers. They are expected to fly out soon and are under the supervision of the Korean Embassy in Pakistan.

The evacuees passed vigorous and sometimes perilous Taliban checkpoints to get to the Kabul airport. The Korean embassy in Afghanistan, in cooperation with friendly countries, helped the evacuees reach their flights on chartered buses.

The Afghan evacuees feared possible retaliations from the Taliban because of their work with Korea and had requested help from the Korean government.

The evacuees were initially expected to depart for Korea late Wednesday, but their departure was delayed to 4:53 a.m. Thursday because of airport security in Islamabad.

Upon arrival at Incheon airport, the Afghans were greeted with applause by Justice Minister Park Beom-kye and other Seoul officials.

The Korean government has stressed that the Afghans are "persons of special merit" rather than refugees.

The evacuees contributed their skills and expertise to Korean government efforts to help rebuild a war-torn Afghanistan over the past two decades, including working for a now shuttered Korea-built hospital and a vocational training center. They worked from anywhere between one and 10 years. The evacuee list included their spouses, children and parents.

The evacuees include medical professionals, IT experts, interpreters and other local staff who worked for the Korean Embassy in Afghanistan, the Korea International Cooperation Agency (Koica), the Korean Hospital in Bagram, the Korean Vocational Training Center and a provincial reconstruction team in Charikar.

The Afghans were to be tested for Covid-19 upon arrival and stay at a temporary accommodation nearby until the polymerase chain reaction (PCR) test results came out.

Anyone who tests negative will be transferred on chartered buses to the National Human Resources Development Institute in Jincheon, North Chungcheong, where they will undergo a 14-day isolation period and two more Covid-19 tests, standard coronavirus quarantine measures.

The entire group will be housed at the institute's Leadership Campus for around six weeks, where they will receive education and guidance on resettlement, including classes on Korean language and culture. They will then be able to move to other accommodations prepared by the government.

The Justice Ministry said that these Afghans and their families were initially granted C-3 short-term general visas to land in Korea, which will allow them to stay for up to 90 days. This will immediately be upgraded to F-1 visas, which enable longer-term visits but do not allow for employment.

They are expected to receive F-2 residency visas following their six-week stay at the training institute in Jincheon. The F-2 visa is considered equivalent to refugee status.

An F-2 long-term visa holder can be employed in Korea, live in the country for up to five years and eventually be eligible to apply for an F-5 permanent residency visa. The F-2 visa can be renewed every five years.

In a briefing at the Incheon airport Thursday afternoon, Justice Minister Park said, "Refugees have to go through a complicated application, background check and examination process, but since these individuals have specially contributed to the Korean national interests in Afghanistan, there are plans to provide them with more consideration in terms of living expenses, settlement support and education."

The Justice Ministry earlier Thursday gave advance notice of a revision to the Immigration Control Act to provide the F-2 long-term visas to people who have worked for the interests of Korea and to allow them to get employed in the country without restrictions. An amendment to the act had already been proposed before the Afghan evacuee situation, and the ministry said this situation hastened the revision process.

Background checks were already conducted on the evacuees prior to their flights to Korea.

Some 40 Justice Ministry officials, four doctors and six nurses will be dispatched at the Jincheon center to help the Afghan evacuees, he added.

Since the U.S. war on terror in Afghanistan began in 2001, the Korean government has conducted various military and humanitarian relief operations, including provincial reconstruction team activities from 2010 to 2014 offering medical services and vocational training.

"This is the first example in the history of Korean diplomacy where we have evacuated locals [from a foreign country] by actively investing ours manpower and assets taking into consideration humanitarian concerns," said Choi Young-sam, spokesman for Seoul's Foreign Ministry, in a briefing Thursday. "Korea is fulfilling its moral obligation as a responsible nation that does not forget its friends and does not turn away from the difficulties of its neighbors.

The U.S. Department of Defense expressed gratitude to the Korean government for its part in contributing to the evacuation of Afghans.

Referring to Korea's airlift operation, Maj. Gen. William Taylor, deputy director for regional operations of the Joint Staff, said in a briefing at the Pentagon Wednesday the United States was "extremely grateful for their contribution to increase our outflow."