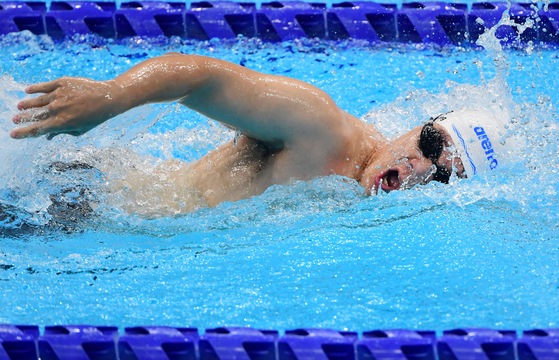 Starting out the race in lane two, Jo began in fourth, then pulled himself up to third at the halfway point. But with world-class swimmers putting on a last spurt, Jo touched the touchpad fifth at 1:28.46, 6.88 seconds behind gold medalist Takayuki Suzuki of Japan, but two seconds faster than his own preliminary race time.

Swimmers who can use their arms and hands but not their trunk or legs compete in the S4 class. Jo was born with cerebral palsy and started swimming to assist his rehabilitation.

Jo is a world-class swimmer, having previously won gold medals in the men's 50-meter, 100-meter and 200-meter freestyle at the 2016 Rio Games. Earlier in the day, Jo finished fourth out of the 12 swimmers in the freestyle preliminaries, where the top eight advanced to the finals. Jo swam the 100-meters in one minute and 30.41 seconds.

On the first day of the Tokyo Paralympics, Jo advanced to the finals of the SB3 men's 50-meter breaststroke finals with a record of 51.58 seconds despite being his first try competing in the men's breaststroke race on the big stage. He finished sixth out of eight swimmers.