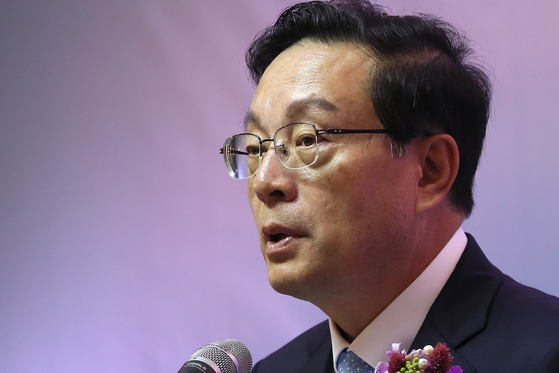 The Seoul Administrative Court on Friday ruled in favor of Son, who requested cancellation of a reprimand the FSS had imposed on him over the improper selling of high-risk derivative-linked funds (DLFs) by Woori Bank that left some investors with big losses.

FSS had reprimanded Woori Financial Group Chairman Son, who was the CEO of Woori Bank when the bank sold DLFs, in January 2020. As a result, he was prohibited from working at financial companies for at least three years. The FSS had held the bank’s CEO responsible for failing to monitor the high-risk investment products from being released and being sold to individual customers who lack expertise in the instruments.

Son in March 2020 filed a suit against the FSS, requesting the court to nullify the reprimand, arguing it is not justifiable for the FSS to penalize the management for problems that occurred despite the bank already having internal guidelines.

Son also requested an injunction so the reprimand would be suspended until a ruling was made. The administrative court accepted the injunction request enabling Son to extend his term as chairman during last year’s shareholder meeting. His current term as chairman ends in March 2023.

On the court’s decision, the FSS said in a statement Friday that it respects the decision and will further decide on whether to appeal to the decision after thoroughly analyzing the written verdict.

The court’s decision could impact other pending issues. Hana Financial Group Vice Chairman Ham Young-joo has also filed an administrative suit against the FSS for the same reason as Son. Ham was the CEO of Hana Bank when the bank sold the DLFs.

The DLF products were designed to provide high returns when the interest rates of major economies stayed above a certain level. The products ended up incurring massive losses as bond yields in the United States, Britain and Germany unexpectedly sunk in 2019.