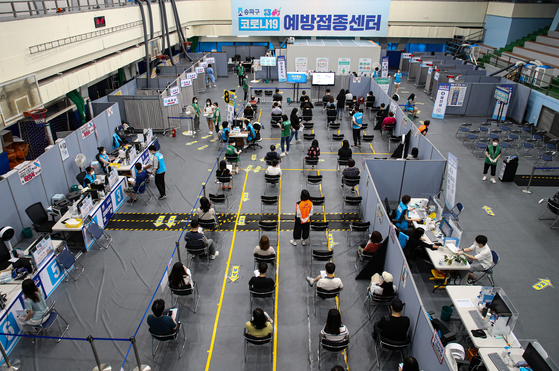 On the second day of Covid-19 vaccinations for people between the ages of 18 and 49 on Friday, people await shots at a vaccination center at the Songpa District's Sports and Culture Center in Seoul. [YONHAP]

According to the Korea Disease Control and Prevention Agency (KDCA), daily cases have stayed above 1,000 for 52 consecutive days. As of Friday, the country recorded a total 245,158 cases.

Eight deaths from Covid-19 infections were reported on Thursday, raising the death toll to 2,264.

The number of critical patients was 427 on Thursday, as the highly contagious Delta variant continues to spread.

Despite six weeks of tough social distancing measures enforced in the greater Seoul area, the fourth wave has shown no signs of abating. The government is speeding up vaccinations to fight the pandemic.

On Thursday, the government started inoculating people between the ages of 18 and 49. They were to receive mRNA vaccines produced by Pfizer or Moderna through Oct. 2.

By the end of Thursday, 67.2 percent of the population between the ages of 18 and 49 had made reservations for shots.

The government aims to give first shots to at least 70 percent of the population before the Chuseok holidays, which run from Sept. 19 to 22, and to achieve herd immunity by November.