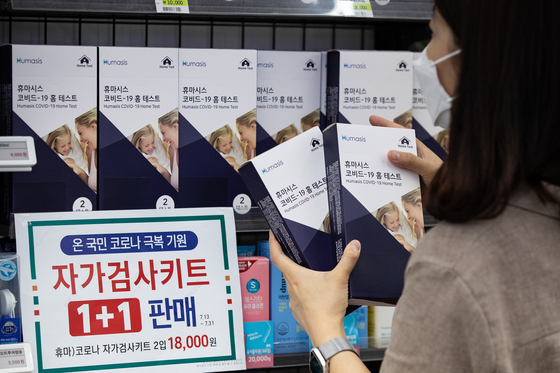 A customer shops for Humasis Covid-19 self-test kits at a convenience store in downtown Seoul on July 14. [NEWS1]


Covid-19 self-test kits are fast, convenient and cheap. They also might be all but useless.

Currently in Korea, a total of three Covid-19 self-test kits are available for sale. Gunpo, Gyeonggi-based Rapigen’s self-test kit was the first product to receive approval from the Ministry of Food and Drug Safety on July 13. SD Biosensor and Humasis sold their self-test kits under the conditional approval and recently received the formal nod from the ministry.

A total of 15.68 million self-test kits from the three companies were produced as of July 23, and roughly 9.49 million have been retailed at pharmacies, convenience stores and supermarkets, according to the Ministry of Food and Drug Safety. They cost about 15,000 won ($13), while the test result is available within 15 to 30 minutes.

Rapigen said it is currently in talks with foreign countries to export its self-test kits, including Southeast Asian countries like Vietnam and Thailand and European countries, such as Italy, Germany and Romania.

But the accuracy of the tests is an issue, with Covid-19 self-test kits being blamed by some for the recent fourth wave of the virus. Daily coronavirus cases have recently been on the rise, above 1,000 for over a month, and breaking the 2,000-level in recent days. 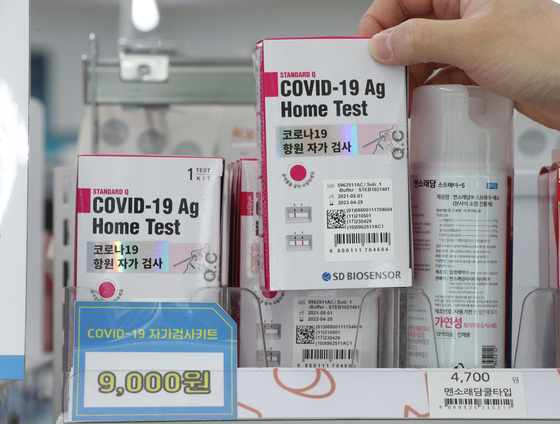 SD Biosensor's Covid-19 self-test kits are displayed in a GS25 convenience store in May. [NEWS1]

Some critics argue that the data about sensitivity and specificity companies provide are not accurate enough. People infected with the virus could go outside and spread the virus to others after the test kits reported negative results.

In a study conducted by the Korean Society for Laboratory Medicine in December, the test kits demonstrated only 41.5 percent sensitivity, meaning that six out of 10 infected people could be falsely told they don’t have the virus. The group tested SD Biosensor’s product on a total of 680 samples.

“The self-test kits only react to people who have a lot of virus present in their bodies,” the Korean Society for Laboratory Medicine said in a report. “Self-test kits are known to have about 80 to 90 percent sensitivity, but that’s because the tests are conducted on patients who showed severe symptoms or those who have high viral loads.”

The government said the self-test kits may have contributed to the fourth wave of the pandemic.

“The government has not been collecting data about patients who got negative results with the self-test kits when they were actually infected with the virus so can’t provide details,” Park Young-joon, an official from the Korean Disease Control and Prevention Agency, said during a briefing on July 15. “But we see that it is possible that the virus spread quietly in people’s daily lives.”

“There could be some cases that people tested negative with the self-test kits but it turned out they were infected when tested with polymerase chain reaction [PCR] tests.”

Lee Hyuk-min, a professor at Yonsei University Severance Hospital’s laboratory medicine department, argues that the government should cancel the approvals, saying the inaccuracy of the self-test kits could result in the further spread of the virus. Lee also serves as head of the Covid-19 task force team at the Korean Society for Laboratory Medicine.

“When the ministry requests the companies to bring 100 pieces of data, the companies will conduct 1,000 experiments and turn in the best 100,” Lee said.

Manufacturers of the test kits disagree.

"Self-test kits are just a secondary tool that helps discovering patients quicker, so the accuracy is definitely lower than the PCR test," said a spokesperson for SD Biosensor. "It can't be an alternative to PCR test, which diagnoses the infection."

In response to the growing doubts, the Seoul Metropolitan Government on Aug. 18 stressed the usefulness of the self-test kits, presenting some numbers. A total of "641 patients learned that they were infected with the virus after they voluntarily tested themselves at home with self-test kits," an official said, indicating that the kits are properly playing a role as a secondary tool to find infections quickly.

The government offered a cluster infection case in a convalescent hospital in Daejeon in July as an example. A total of 24 virus cases were reported, but the country was able to prevent the further spread as "a family member of a patient at the hospital discovered that he was infected with the virus with a self-test kit," said an official from the Central Disaster Management Headquarters.

The Ministry of Food and Drug Safety emphasizes that people who have had contact with patients or those who show suspicious symptoms must take a PCR test, regardless of the results of self-test kits.