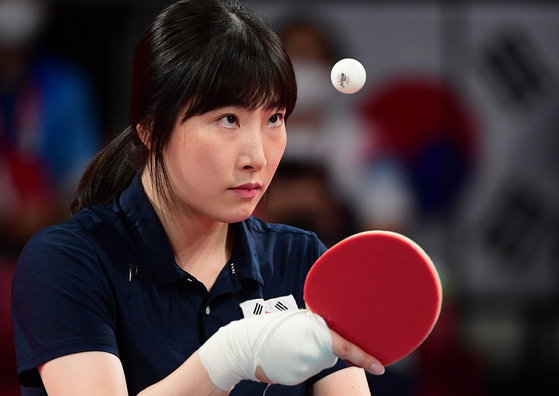 
The Korean table tennis team took home a total of seven medals at the 2020 Tokyo Paralympics on Saturday, claiming one silver and six bronze medals on a very busy day at the Tokyo Metropolitan Gymnasium.

Seo Su-yeon took the sole silver medal in the women's singles class one to two, losing to world No. 2 Liu Jing of China 3-1 in the final. Seo, ranked No. 3 in the world, earlier beat world No. 4 Catia Christina da Silva Oliveira of Brazil in the semifinal.

Earlier in the day, Lee Mi-gyu claimed Korea's first medal of the 2020 Tokyo Paralympics. Lee lost her semifinal game in the women's singles class three competition to Alena Kanova of Slovakia, but still took home a bronze medal under Paralympic table tennis rules that award four medals — two bronze, a silver and a gold — in each category.

Nam Ki-won took home the fourth bronze medal, losing to countryman Joo Young-dae in the men's singles class one semifinal. Joo advances to the final on Monday, where he will face teammate Kim Hyeon-uk, who beat Thomas Matthews of Great Britain in the other semifinal.

The Korea-Korea matchup means Korea is guaranteed to take gold, silver and bronze in the men's singles class one contest.

The final bronze medal of the day went to Jung Young-a, who lost her women's singles class five semifinal to Zhang Bian of China.