Household borrowing to be capped by annual income

Household borrowing to be capped by annual income 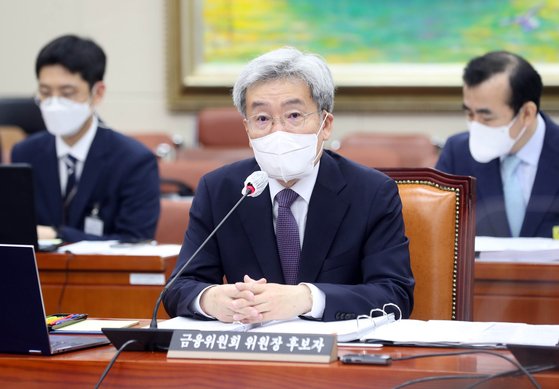 Koh Seung-beom, nominated as the chairman of the Financial Services Commission, answers questions during a confirmation hearing held Friday at the National Assembly in Yeouido, western Seoul. [YONHAP]


Households will only be able to borrow as much money as their annual income as financial authorities try to curb the country’s growing household debt.

According to financial industry sources on Sunday, Hana Bank has already put a cap on its unsecured loan and overdraft as of Friday. For unsecured loans, the ceiling has been set at the borrowers’ annual income, and for overdraft at 50 million won ($43,000).

Up until now, local banks have been considering borrowers' credit scores, the size of the organizations they work for, their annual income and other factors when setting the upper limits for their loans.

From next month, however, more banks will start limiting the upper cap for unsecured loans to match the borrowers’ annual income. They will take into account borrowing from all institutions.

Woori Bank will impose the cap on fresh unsecured loans from next month. Shinhan Bank and KB Kookmin Bank are reviewing the plan.

Some internet banks have also jumped on the bandwagon. KakaoBank will be limiting the maximum value of unsecured loans to the borrowers’ annual income from next month. K bank has also decided to impose the same limit, but when the cap will be placed has not been decided yet.

This major tightening in unsecured loans by banks in Korea comes after the country’s financial authorities requested banks' cooperation in an earlier meeting with executives this month.

The Financial Supervisory Service held a meeting with executives in charge of loans at major local banks and requested they limit the maximum amount of unsecured loans to borrowers’ annual income. The regulator also asked the banks to submit plans on how they will impose the limits per their loan programs.

“It is highly likely most commercial banks in Korea will limit the maximum amount of unsecured loans to borrowers’ annual income from sometime next month,” a source from a local bank said on anonymity. “They were pushed strongly by the financial authorities.”

The government may come up with additional plans to curb household debt without bringing a blow to households in desperate need of lending.

“We will thoroughly deal with household debt so that its rapid increase does not harm the financial market's soundness,” said Koh Seung-beom, a nominee as the chief of the Financial Services Commission, during his confirmation hearing at the National Assembly held Friday. “If there is a need for an additional plan, we will actively develop and pursue it.”

Koh, however, emphasized that he will make sure those that really need the loans — and are not just borrowing to invest, such as households that do not own a house — are not disadvantaged by the financial regulators’ efforts to cut down on lending.

Under the financial authorities’ efforts to curb the increasing debt, the average interest on loans has increased to near 3 percent lately.

According to data from the Bank of Korea Friday, the average interest rate on new bank loans to households last month rose by 0.07 percentage points from the previous month to 2.99 percent annually. The rate is the highest since 3.01 percent recorded in October 2019.