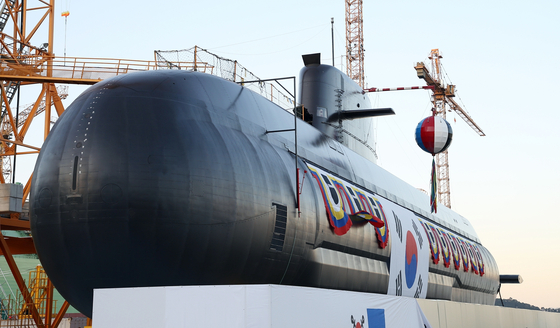 
Expectations are rising that the Korean military will announce the development of an indigenous nuclear submarine within the year, according to military sources who spoke on the condition of anonymity.

According to one source, military authorities submitted a required operational capability (ROC) assessment in the first quarter of this year regarding the possibility of developing a third batch of Jang Bogo-class submarines.

In the ROC assessment, the future Jang Bogo-class submarine is envisaged as being a 4,000-ton nuclear-powered submarine, whose tonnage would exceed 5,000 tons once crew and armaments are loaded.

The submarine would also be able to carry 10 submarine-launched ballistic missiles (SLBMs).

Information obtained by the JoongAng Ilbo further specified that the submarine would be 100 meters (328 feet) long and be able to maintain speeds over 25 knots, or 28.5 miles per hour, underwater.

Current incarnations of the Jang Bogo-class submarine employ diesel or electricity. While their use of an air-independent propulsion system (AIP) enables them to remain submerged for several days at a time, this is not as long as those of nuclear-powered submarines, which can remain underwater for up to 90 days.

The military source explained that they decided to develop a nuclear-powered version of the Jang Bogo-class submarine after assessing the need to carry out underwater surveillance on North Korea and other neighboring countries with speed and stealth without the need to re-surface and refuel constantly.

In their white paper on defense strategy for the near future (2021-25), military authorities previously refused to comment on the likelihood of developing a nuclear-powered submarine, only saying that the third batch of Jang Bogo-class submarines would displace 4,000 tons and that “it would not be appropriate to comment on their fuel source at the current stage.”

A government source with knowledge of defense development plans who spoke on the condition of anonymity told the JoongAng Ilbo, “Development of a light aircraft carrier and a nuclear-powered submarine is the most important weapons project in the eyes of the Moon Jae-in administration.

“While development of a light aircraft carrier is proceeding, nuclear-powered submarines remain a sensitive issue and are thus being pursued under the surface.”

The current design for the indigenous nuclear-powered submarine is a teardrop-shaped hull that gets more narrow as it moves toward a pointed stern.

Another government source said, “Overall, the [third batch of Jang Bogo-class submarines] will be developed to possess the same advantages of the L.A.-class, Virginia-class and French Schiff-class submarines.”

The Korean Navy currently deploys six SLBMs on board the Dosan Anchang, the first submarine of the Jang Bogo-class. The SLBM is an improved version of the Army's short-range ballistic missile (SRBM), the Hyunmoo-2B, which has a maximum range of 500 kilometers (311 miles).

The SLBMs deployed on the third batch of Jang Bogo-class of submarines are more likely to be a larger, heavier and longer-range version of missiles than the Hyunmoo-2B.