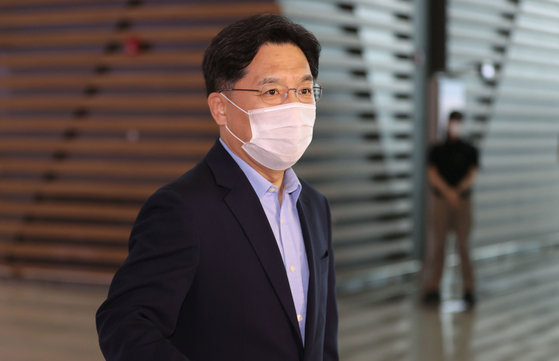 South Korea's chief nuclear envoy, Noh Kyu-duk, speaks to reporters at Incheon International Airport, Sunday, before departing for the United States. Noh plans to meet officials from the State Department, the White House National Security Council and others to follow up on discussions he had with his counterpart, Sung Kim, in Seoul last week. [YONHAP]

South Korea's top nuclear envoy departed for the United States on Sunday for talks on efforts to resume dialogue with North Korea, the Foreign Ministry said.

Noh Kyu-duk's four-day trip to Washington comes after his U.S. counterpart Sung Kim's visit to Seoul last week, during which the two discussed humanitarian aid to the North amid heightened tensions over Pyongyang's protest against military exercises between the South and the U.S.

"Our government has been holding in-depth discussions with the Biden administration over various measures to resume talks with the North," he told reporters before departing for Washington.

"I am visiting the U.S. to discuss with officials ways for the early resumption of the peace process on the Korean Peninsula," he added.

During his trip, Noh plans to meet officials from the State Department, the White House National Security Council and others to follow up on discussions he had with Kim in Seoul, according to the ministry.

North Korea slammed the joint military exercise as the "most vivid expression of the U.S. hostile policy" toward the North and warned of a "serious security crisis."

The North did not take any military action against the South during the summertime joint exercise but remains unresponsive to the inter-Korean hotline calls via the liaison office and military channels.