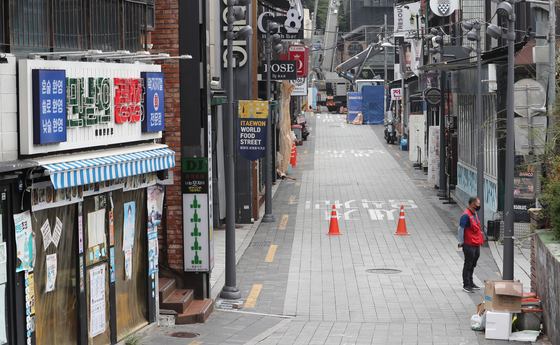 The streets of Itaewon, central Seoul, which usually boom with people on the weekends, spend a quiet Sunday as Level 4 social distancing rules stay in place for the seventh week. Itaewon’s 2021 first quarter sales revenue dropped more than 80 percent since 2019, and the vacancy rate of the neighborhood’s shopping district decreased to 31.9 percent in the second quarter of 2021. [NEWS1]


Hit with high rents and Covid-19 cluster infections, the once voguish Itaewon area in central Seoul is now facing difficulties.

Many may remember Itaewon as a vibrant neighborhood, swarming with people of all ages and nationalities. But that Itaewon has become the stuff of legend.

Today, the streets of Seoul's international district are barren.

There are hardly any people on the streets, and empty shops are plastered with signs looking for renters.

In the few shops that do remain open, the owners spend hours with their necks craned toward the occasional passersby.

A 46-year-old restaurant owner, Ms. Lee, said that her diner is going through one of its toughest times in the seven years that she has been in Itaewon.

"The restaurant couldn't handle the sudden drop in revenue last year, so we had to cut back the number of employees," Lee said.

Lee is not ready to leave Itaewon just yet, but she may have to take greater measures in order to keep her business afloat.

"We simply cannot afford a 10-million-won [$8,600] rent, and if I am to continue my business here, I think I will have to get a loan," she said. "All my hopes are pinned on the Covid-19 herd immunity that the government says can be achieved by November."

Other similar shopping districts in Seoul such as those in Hongdae, Konkuk University and Gangnam Station, each faced 49 percent, 48 percent and 41 percent drops in revenue, respectively.

Nonetheless, no location recorded as steep a dive in turnover as that of Itaewon.

As sales revenue plunged, many shops in Itaewon's shopping districts were cleared out.

The percentage of vacant space in Itaewon's shopping districts in the second quarter of 2021 was 31.9 percent. This is nearly five times higher than Seoul's average rate of vacancies, which is 6.5 percent.

Itaewon's period of stagnation actually began in 2018, when the U.S. Army Garrison moved out of Yongsan District, central Seoul.

The relocation of the U.S. Forces Korea drastically downsized the foreign population in Itaewon, located in the same district.

Consequently, Itaewon lost some of its hip and multicultural vibe that had previously given the neighborhood its unique character.

Stores and restaurants that were unique to Itaewon closed down when they could no longer afford the sky-high rent prices that go together with Itaewon's popularity. Meanwhile, big brand names moved into their places.

"When the business was at its peak, rent doubled from 1.5 million won to 3 million won," said a 60-year-old real estate agent in Gyeongnidan-gil, Itaewon.

"Itaewon lost its charm with the young people when these unique locations were replaced with big businesses."

More recently, Itaewon was stigmatized as a hot spot for Covid-19 after cluster infections broke out at the neighborhood's nightclubs and bars in May last year.

"People came to think of Itaewon as a virus-infested place, and the neighborhood now resembles a ghost city," said Kang Won-rae, a member of a famous '90s pop-duo Clone who closed his pub in Itaewon after the virus outbreak in the neighborhood.

The district also plans to select 20 aspiring entrepreneurs for its "Itaewon Star Shop Project" which will offer support programs such as loans for rent and start-up consulting.

"If proper support such as government loans for store remodeling and limited free rent by the leaseholders can be provided to small-sized business owners, shopping districts in Itaweon may be revived," said Mr. Kang, a real estate agent in Yongsan District.

"Store owners also need to make efforts to follow the trend of the restaurant industry, which has been reorganized to mainly center on delivery."