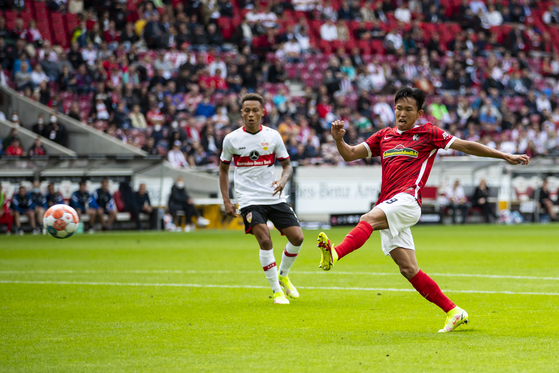 
Korean striker Jeong Woo-yeong scored two goals in nine minutes for SC Freiburg against Stuttgart on Saturday, leading his team to a 3-2 win and becoming the first player ever to score two for the club in the first 10 minutes.

Jeong got off to a flying start, heading home his first goal just three minutes into the match to take Freiburg up 1-0. Jut six minutes later he picked up a deflection and hammered it home to take the score to 2-0.

Freiburg added one more before the end of the first half, then conceded two after the break to leave the final score at 3-2.

The two goals on Saturday were Jeong's first of the 2021-22 season.

Jeong joined Freiburg in 2019 after a season with Bayern Munich. He scored four goals for the club in his first season before spending the 2020-21 season with the Bayern Munich second team on loan. He returned to Freiburg this season and is looking a lot more confident, appearing in every game the team has played so far.

Jeong, currently 21 years old, made his debut with the Korean national team this year in a friendly against Japan in March.