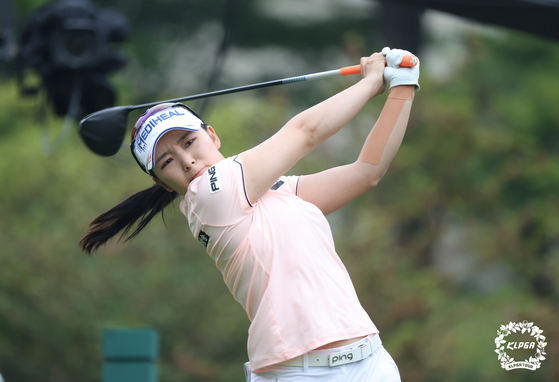 Lee Da-yeon tees off on the first hole in the final round of the Hanwha Classic 2021 at Jade Palace Golf Club in Chuncheon, Gangwon on Sunday. [NEWS1]

Lee looked strong from day one, finishing the first round tied for fourth with three-under, 69. Another 69 took her up to tied for third on Friday, before a big seven-under, 65, gave Lee the sole lead after the third round on Saturday.

Lee built on that momentum on Sunday, again having the best day on the course with a six-under, 66, to round off the tournament and take a comfortable lead for first place.

Lee took the win with a bogey-free round on Sunday, hitting four birdies and an eagle on the par-4 10th to cap off an impressive tournament.

Lee has won a total of six KLPGA Tour events, but has been struggling to reach the winner's circle over the last two years. Her last victory was at the Hyosung Championship in December, 2019. Sunday's victory is her second career major title, following the 2019 Korea Women's Open.

This year’s Hanwha Classic is the 10th edition of the tournament and the third major KLPGA tournament after the 43rd KLPGA Championship in May and the 35th Korea Women’s Open in June.

The KLPGA returns on Thursday for Edaily Ladies Open at Sunning Point in Yongin, Gyeonggi.