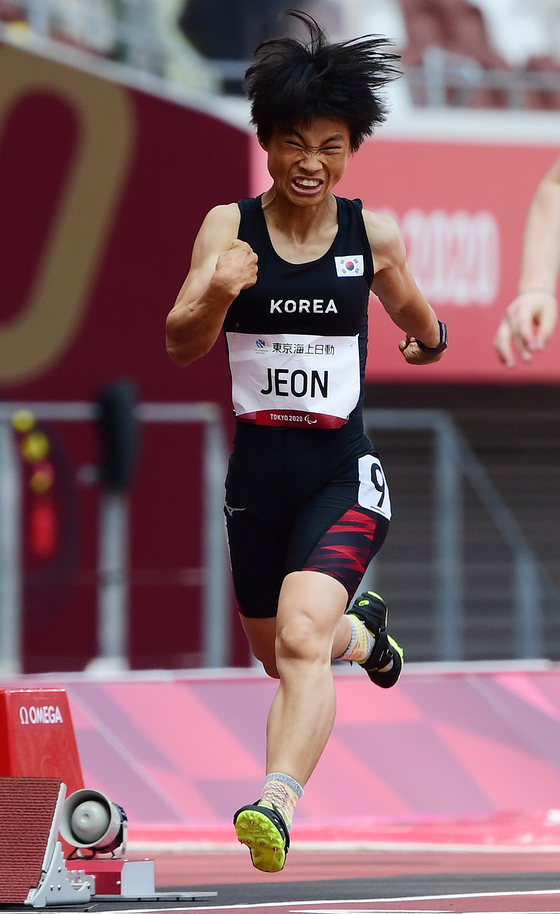 Jeon Min-jae runs in the women's 200 meters T26 race at the Olympic Stadium in Tokyo on Sunday. [JOINT PRESS CORPS]


Korea's Jeon Min-jae narrowly missed out on a medal in the women's 200 meters T36 race on Sunday, finishing in fourth place.

Jeon missed out on the podium by 0.21 seconds at the Olympic Stadium in Tokyo on Sunday with a time of 31.17 seconds, a season best, just behind Yanina Andrea Martinez of Argentina in third with a time of 30.96.

China's Shi Yiting won the race with a new world record time of 28.21 seconds, followed by Danielle Aitchison of New Zealand at 29.88.

The T36 sport class includes athletes with impairments that impact coordination, including athletes with hypertonia, or increased muscle tension, damage to the central nervous system and uncontrollable involuntary movements. Jeon has cerebral palsy, an underlying illness that can cause all three of those symptoms.

Tokyo is Jeon's fourth Paralympics. At the 2008 Beijing Paralympics she also finished in fourth place in the 200-meter sprint, before taking back-to-back silvers in the event at both the 2012 London and 2016 Rio Games.

Jeon will return to the track on Wednesday for the women's 100 meters T36 race.