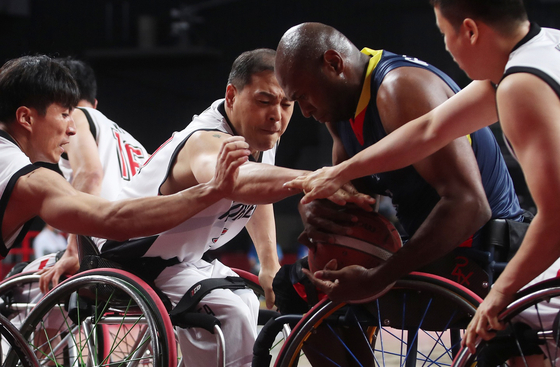 Korean wheelchair basketball players fight for the ball during a game against Colombia at the 2020 Tokyo Paralympics on Saturday. [NEWS1]


The Korean wheelchair basketball team lost its final group stage game of the 2020 Tokyo Paralympics 74-64 to Canada on Sunday at Musashino Forest Sport Plaza in Tokyo.

Canada took the lead in the first quarter and held on for the rest of the game. Korea rallied, narrowing the gap over the next three quarters and getting within two points of a tie at one point in the fourth quarter, but Canada broke through to take a comfortable 10 point lead in the last few minutes of the game.

The wheelchair basketball team on Saturday beat Colombia for their first win of the 2020 Tokyo Paralympics, and their first victory at a major tournament since the 2000 Sydney Games.