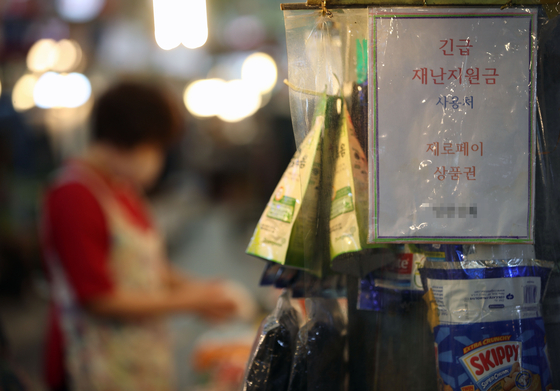 A store in a traditional market in Seoul on Monday posts a notice informing customers that it will accept payment in emergency relief grants from the government. [YONHAP]

Applications for the government's emergency relief grants can be filed from Sept. 6 to Oct. 29, and most residents of Korea are eligible, including a few foreigners.

The grants, the second of their kind since the pandemic outbreak last year, are 250,000 won ($214) per person and are offered to everyone below the top 12 percent income bracket, although some non-rich people will be ineligible if they own expensive real estate or pulled in lots of money from financial investments.

The Ministry of Economy and Finance and the Ministry of the Interior and Safety on Monday released more details on the grant, which are funded through a supplementary budget.

According to the government, single people living alone are eligible if they pay 170,000 won or less for their monthly health insurance. That's roughly equivalent to an annual income of 58 million won a year or less.

The cutoff is higher for families.

The range for couples is between 200,000 won a month to 280,000 won, depending on whether they are single-income or double-income.

The range increases as the number of dependents grows.

However, even if people qualify because of their health insurance payments, they could be disqualified if they own expensive property.

Foreigners are eligible if they are permanent foreign residents with F-5 visas or marriage immigrants with F-6 visas. They must be covered by national health insurance. If they are not covered by employers, they need to be registered as regional subscribers.

The minimum requirement to be a regional subscriber is to have lived in Korea for at least six months. The only exception to this rule is for people who are certain to stay more than six months, such as students, people who married Koreans or immigrants.

The government plans to give the grants to roughly 20.18 million households.

In the first week applications will be accepted on a staggered schedule accordingly to the applicants' year of birth.

Unlike the grants paid in May 2020, there is no maximum amount a family can receive. Each family member is eligible to get 250,000 won each. A family of four will get 1 million won, a family of five 1.25 million won. 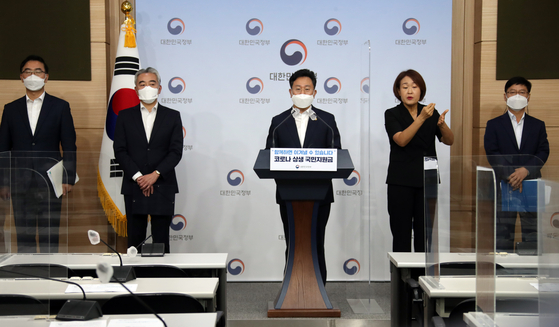 Ko Kyu-chang, Interior and Safety vice minister, announces details of the emergency relief grant, the second of its kind since 2020, at the government complex in Seoul on Monday. [YONHAP]

But the government is limiting where the grants can be spent, and they must be spent by the end of the year.

The grants can be spent at mom-and-pop shops, restaurants, hair salons, to pay for hospital bill as well as tuition at hagwon or cram schools.

They cannot be used at department stores or supermarket chains run by conglomerates.

They can be used at franchises run by individuals, but not directly run by the chain headquarters.

Starbucks, whose stores are directly operated by Starbucks Korea, will not be included.

"We have come up with emergency grant measures to help a public struggling through Covid-19," said Ko Kyu-chang, Interior and Safety vice minister.  "We will focus on swiftly and smoothly executing the emergency grants."