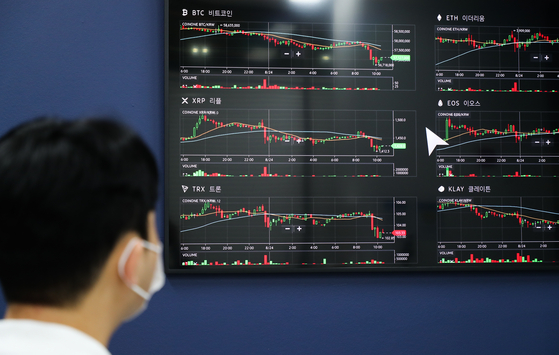 Prices of cryptocurrencies are displayed at a digital screen at Coinone's customer service center in Yongsan District, central Seoul, last week. Bitcoin is traded at around $48,000 as of 2:30 p.m. Monday according to CoinMarketCap. [YONHAP]

Upbit is by far the largest cryptocurrency exchange in Korea and the second largest globally in terms of trading volume.

This comes as the world remains gripped by crypto-mania and as Korea continues to crack down on unregistered exchanges, driving a flight to quality.

As of 2:30 p.m. Monday, Upbit was the second largest exchange globally in terms of 24-hour trading volume, at $9.3 billion, about half of Binance’s, according to CoinMarketCap.

Trading by teenagers has increased significantly. According to Upbit rules, people 19 years old can trade under their own names.

People in this group had 4 billion won on deposit at the country's four major cryptocurrency exchanges — Upbit, Bithumb, Coinone and Korbit — as of the end of July, according to data released by the office of Rep. Yoon Doo-hyun of the main opposition People Power Party on Sunday.

Only won holdings were considered.