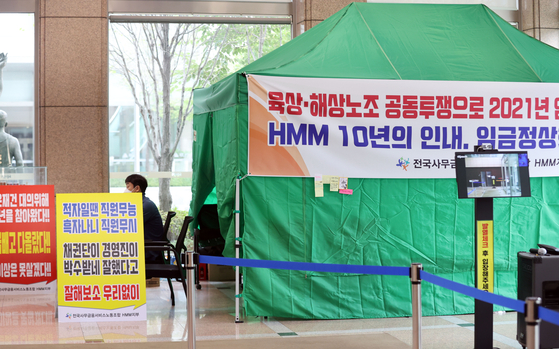 Tent set up by the HMM labor union in the company 's lobby in central Seoul on Aug. 30 [YONHAP]


An HMM union is holding a strike vote as wage negotiations with management have broken down.

The union, representing the company’s workers employed for duties on land, said it would complete the vote by 8 a.m. Tuesday.

They chose to resign instead of walking out because Korean law doesn’t allow strikes by workers on vessels operating outside of Korea.

On Wednesday, they decided they would give management until Sept. 1 before actually carrying through with their threat to resign.

If both unions choose to go on strike, they will have significant leverage in negotiations with the management of HMM, the largest shipping company in Korea.

The strike could disrupt the global transportation of goods, which is already facing bottlenecks due to lack of containers and vessels since the pandemic started.

Last week, the Shanghai Containerized Freight Index (SCFI), an index reflecting freight rates for export container ships from Shanghai, was up for the 16th week straight.

“The strike could be avoided because the union delayed the extreme decision and the requests by the unions are not overwhelming compared to the six trillion-won ($5.2 billion) profit HMM is [projected to] earn this year,” said Choi Go-woon, an analyst at Korea Investment & Securities.