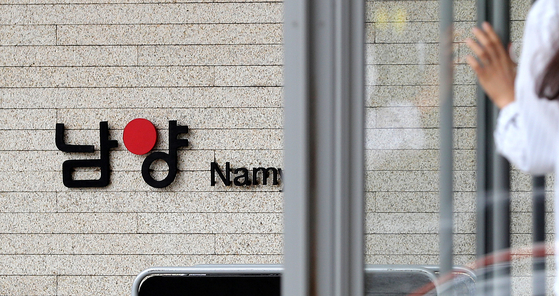 
Hahn & Company sued the chairman of Namyang Dairy Products last week to get him to complete a sale of the company, as promised in May.

Hahn & Company, a private equity group, said on Monday that it filed a suit with the Seoul Central District Court on Aug. 23.

It said the suit was “inevitable” after Namyang Dairy Products Chairman Hong Won-sik refused to close a sale of 53 percent of the company “without particular reasons,” made “unreasonable demands” and threatened to cancel the sale contract if his demands were not met.

Hahn & Company did not disclose Hong's demands, but said it wasn't going to comply with any.

At the time, Hong promised to step down.

Hahn & Company said that Hong was scheduled to close the deal at 10 a.m. on July 30 following an extraordinary shareholders’ meeting earlier the same day.

“But we learned that the seller quietly hired a new law firm ahead of the imminent closing date, so we inquired about the scheduled deal,” said Hahn & Company in a statement.

In response, Hong “sent us an abrupt and bizarre document at 10 p.m. on July 29 saying that he had not been notified that the deal closing is July 30.”

In a statement released on Aug. 17, Hong said, “My stance [on the deal] has not changed.”

But, according to Hahn & Company, Hong has not withdrawn his demands and has implied he could cancel the deal if his demands were not met by Aug. 31.

The private equity group said its lawsuit will be withdrawn if the seller proceeds with the deal.

In response to Hahn & Company, Hong’s spokesperson said that Hong “feels sorry about [Hahn & Company’s] violation of contract confidentiality,” according to a report from Yonhap.

The spokesperson added that there is still some time left to negotiate and that Hong plans to negotiate until the last minute.

Namyang Dairy Products reported a 24.7-billion won net loss in the first half, down 7 percent on year, on sales down by 1.1 percent to 471 billion won.

It had 84.7 billion won in cash and cash equivalents.

The company is estimated to have real estate worth more than 400 billion won, including its headquarters in Gangnam, southern Seoul.